Sam Smith does the thing most comedians never want to do: cold crowd work. But, he tells Chris Schulz, he loves it.

During a weekend taping of Family Feud, Three’s now-defunct weekday game show, Sam Smith stood up in front of a live studio audience of 80 people, switched his microphone to ‘on’ and started talking.

Smith does this often, most nights of the week, for any local television show that requires a live audience. Recently, he’s in high demand, with his weeknights booked with appearances on 7 Days, Popstars NZ, The Project, Taskmaster NZ and Have You Been Paying Attention?

His job is to keep the energy up, the laugh count high. To do this he wanders through the crowd, asking questions, sparking conversation, poking fun, and making gentle gags when the cameras stop rolling. “You’re there to make sure that the show is good,” he says. “You’re a vibe guy.”

Often, Smith’s audience isn’t expecting him to do this. That makes the job of crowd warm-up guy one that few comics want to do. “It’s such a stressful environment to try and be funny,” says Joseph Moore, who performs with his partner, Laura Daniel, in the musical comedy duo Two Hearts. Moore did the job only briefly, on Jono & Ben, but didn’t last long. “You’re up against it from the get-go. I definitely hated doing it.”

It’s easy to see why. On the set of Family Feud in 2017, Smith faced the toughest challenge of his warm-up career. Normally, Smith does cold crowd-work for just a handful of minutes, filling in time as producers change camera angles or call on wardrobe to fix the host’s hair. 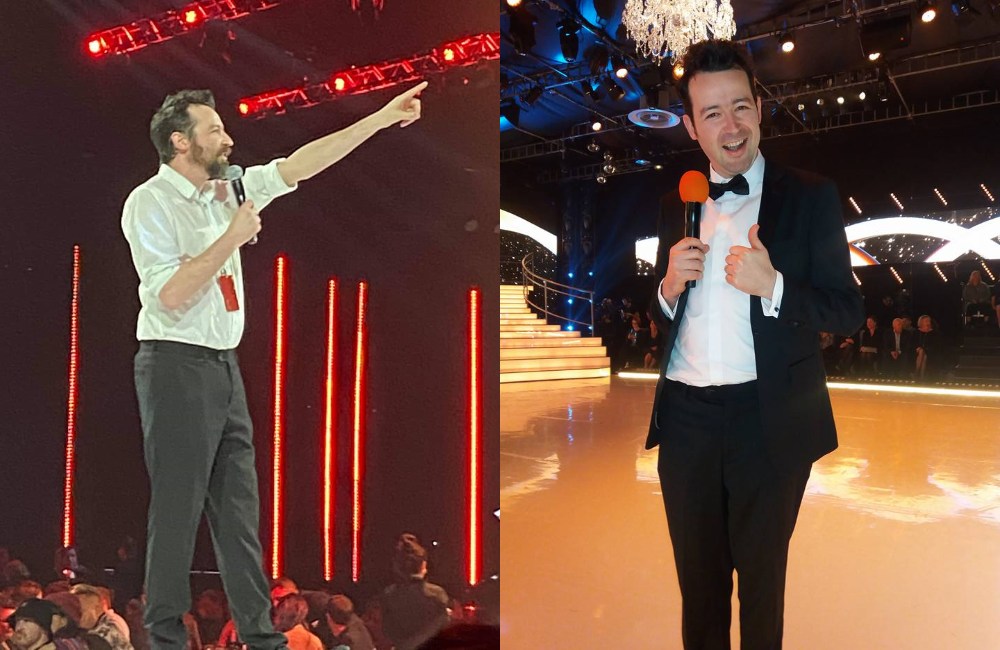 Smith works a crowd, left, and on the Dancing with the Stars NZ set (Photos: Supplied)

This time, it was different. A camera had broken and required a replacement part. A stagehand was sent on an across-town courier mission. Smith settled in for the long haul.

“I filled time for two hours. That’s about an hour and 40 minutes longer than it has ever been before – or since,” he says. “I talked to everyone in the crowd individually. We found all of the birthday pairings in this crowd of 80 people. It was very long.”

Relay that story to Moore and he laughs nervously. “There’s got to be a point where you bring out a TV and put Shrek on,” he says. “I don’t know how you could do that. It’s crazy that he could keep that up.”

Smith, 35, doesn’t seem to know how he does it either. “Sometimes people are really hoping you leave soon so they can get back to seeing Ben Hurley on 7 Days or Dai Henwood on Family Feud,” he says.

“You just don’t think about it.” 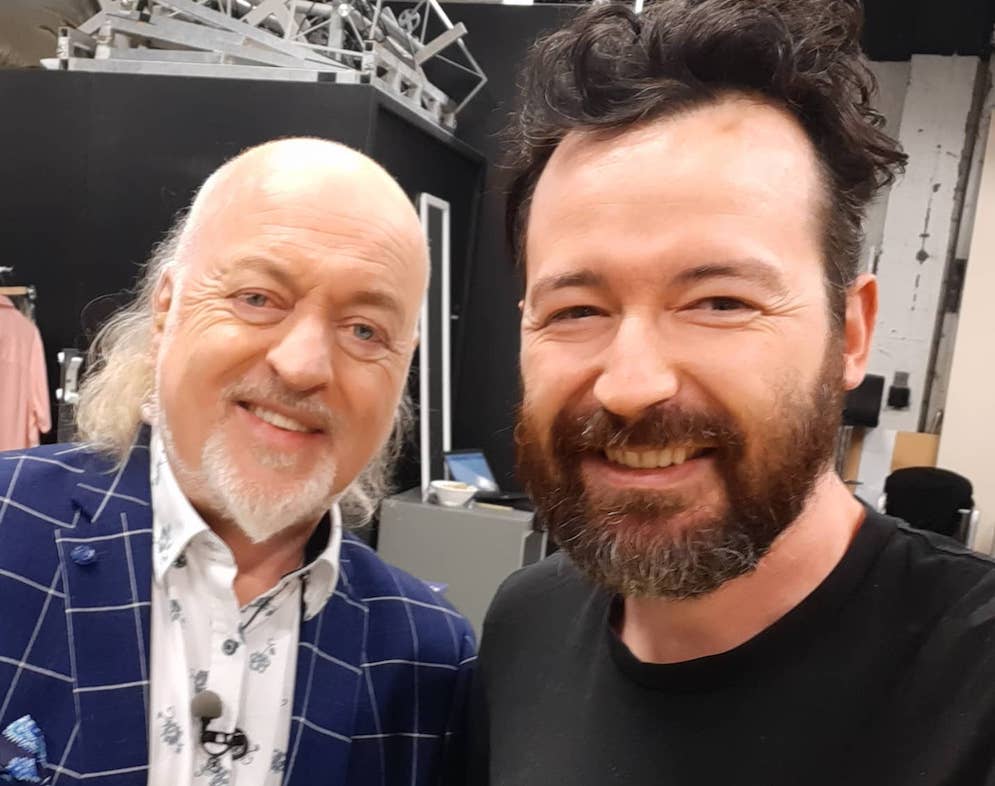 Just four years ago, Smith’s job wasn’t comedy. He was a full-time dentist. That’s not a punchline.

“Fluoride is a safe, cheap and effective way of strengthening teeth for people of all walks of life,” he told Emily Writes for this Spinoff interview at the end of 2016. That story’s headline is: ‘Talking to a non-scary dentist about looking after kids’ teeth.’

The following year, Smith woke up one morning with a terrifying problem of his own. “I … lost all the feeling in my hands,” he recalls. Diagnosed with the autoimmune disease multiple sclerosis, he couldn’t work. A year later, MS took 80% of his sight in one eye. His time as a dentist was up. His five years of study was worthless. “I just couldn’t do it anymore.”

So Smith pivoted. He’d been writing gags part-time for Jono & Ben, so that became his main gig. One night, the show’s regular crowd warm-up guy – Moore – called in sick. Smith volunteered to take his place, and loved every second of it. He writes gags and does his own stand-up too, but crowd warm-up has become his speciality. He’s done it ever since, replying to opportunities from his Hotmail account.

“Lots of other comedians hate doing it but I quite like it,” he says. He simplifies the role by treating it as a fireside discussion. “It’s just chatting with people.” He’ll often point in a random direction and ask something simple. “I always start with nice easy questions like, ‘What’s your name? What do you do?’ From that you get enough information to chat with them.”

Moore’s seen Smith do this in person on the set of Dancing with the Stars NZ. He’s in awe. “It was amazing … His main thing was insulting boomers. So he’d go target the most lovely old lady and just insult her until she came around. Everyone loved it, she loved it. I was like, ‘How are you doing this?’ He’s so … gentle.” With the 7 Days crew (Photo: Supplied)

Smith says his eyesight issue is his biggest asset. “I can’t see very deep into a crowd,” says Smith. That means he can’t see audiences’ puzzled reactions when he stands up with a microphone and starts pointing at them. If someone doesn’t want to respond, Smith likes that even more. “You really press into that to try and win them over. I guess it’s kind of like a challenge – you want everyone to feel relaxed.”

He’s comfortable in an uncomfortable space, but it doesn’t always go the way he wants it to. Smith’s warmed up crowds for serious events, including discussions about legalising cannabis and the euthanasia referendum. “That was a very different gig,” he says. “I was like, ‘they don’t need me here.'” But Smith couldn’t help himself. “I still made jokes,” he says. “I couldn’t stop being myself.”

That attitude nearly got him into trouble. At a leader’s debate last year, just after Discovery purchased Mediaworks, Smith accidentally targeted his new boss. “I am blind, I did not know, he just looked like a man to me,” says Smith. “He was on his phone in the back row so I hassled him about that. I told everyone he was on Tinder.” He still has his job, so Smith assumes he was up for it.

Smith is still paying off his student loan, and comedy doesn’t pay nearly as much as his old job. But this is his dream gig. Ask him if he misses dentistry, and Smith shakes his head. “At the time I felt like I was a comic masquerading as a dentist,” he says.

As our interview is about to come to an end, Smith realises something for the first time. “Dentistry’s quite stressful, but … it’s quite fun helping people,” he says. “I quite liked making people feel relaxed, explaining that dentistry is actually quite simple. It’s an audience of one person who sometimes hates you.”

“I’ve never really thought about that before,” he says. “It’s made me realise something about my life.”