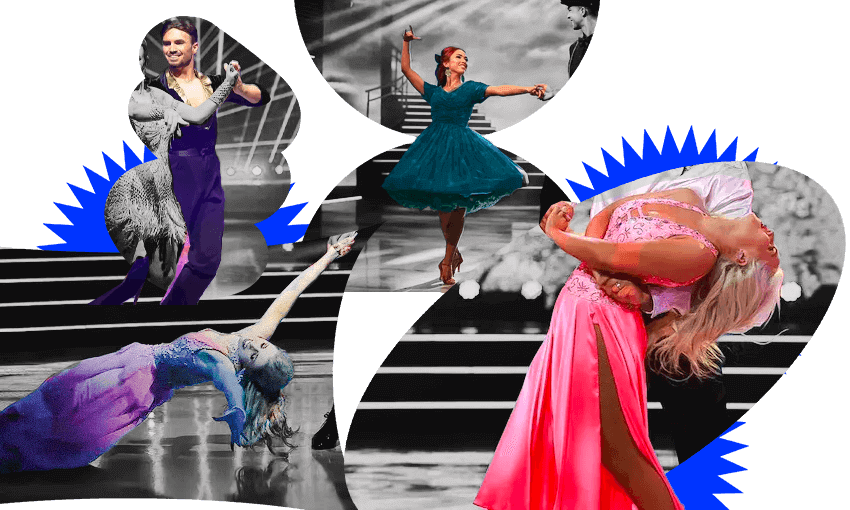 We know it’s hard work for the celebrities, but what’s DWTS like for the dancers they’re partnered with? Sam Brooks asked some of this season’s pros.

We see it every week – the sweat, the tears, the gasping for air as they wait for their scores. Being a star on Dancing with the Stars NZ isn’t easy. Part of the appeal of the show is seeing people who aren’t naturally good at something get better at it by practicing really, really hard.

Their professional partners, on the other hand, experience a whole different set of pressures and demands as they choreograph, train and lead their celebrity through two new dances every week. What’s taking part in the show like from their perspective?

“You only see 90 seconds of work on the TV,” says Loryn Reynolds (current partner Eric Murray; previously Manu Vatuvei). “However, about 80 hours of work goes in every single week to get that 90 seconds. By the time we hit the live show, I mean, to be truly honest, you are absolutely buggered, in every possible way.”

Dancers get four weeks to practise with their celebrity before the competition, but once the season starts it’s basically a seven-days-a-week gig. The dancers work around their celebrity’s schedule, which can differ wildly depending on whether they’re a morning radio host, a full-time politician or an athlete – not to mention their everyday commitments like childcare.

As soon as the live show wraps on Monday night, the remaining dancers start choreographing the next week’s performances so they can go straight into rehearsals on Tuesday morning. From there, they’ve got four days to perfect that dance and film that week’s video package (the clip that plays before each dance). The weekend is spent in the studio doing dress rehearsals from 8:30am to 7pm, leading up to the live shows on Sunday and Monday nights. Rinse and repeat.

That’s all presuming they don’t get voted off. “Sometimes we’ll get given a song and then we’ve got to think about the whole dance,” says Kristie Williams (current partner Dave Letele; previously Mike McRoberts and Zac Franich). “Sometimes we don’t think about it until we know we’ve made it through that week. We wait until Monday night, and we’re like, ‘Oh my gosh, it’s so cool. We’re safe’.”

Loryn says she typically gets about two hours sleep on a Monday night, before going straight into rehearsal at 6:30am on Tuesday. “We’ve got two dances to learn, so I’m normally up all night choreographing. It’s hard work from there. Every night I’m tweaking and re-choreographing. Sometimes things don’t always work for Eric with his stature and being such a big unit. So I’ve got to reevaluate and go from there.”

That’s on top of all the other obligations they have to attend to. Most of the professionals are also working their usual jobs while they’re on the show – after all, Dancing with the Stars only comes around once a year (pandemics allowing).

Brittany Coleman (current partner Alex Vaz, previously Clinton Randell) works as a school teacher. “That’s 8am until 4pm, and then straight after that my whole afternoon into the night is practice, and that’s every day. All day, every day. I’ve had no breaks for the past seven or eight weeks.

“I’m trying to manage a million things and then we come to the show and we’ve got to look professional, amazing, like nothing else is going on in our world.”

The professionals have to work with whatever the celebrity brings to the show in terms of experience. Some people might have danced before or have some stage experience, while others could have absolutely no performance background whatsoever.

But that doesn’t mean those non-performers will necessarily be worse dancers. Brittany mentions that while her current partner, reality show contestant Vaz, has never done any dancing, he’s incredibly quick to pick up steps and understand the timing of the music.

Brad Coleman (current partner Jazz Thornton; previously Marama Fox and Anna Wilcox-Smith) acknowledges that training non-dancers can be challenging. While everybody has an internal rhythm, that can never compensate for years of dancing experience. On Dancing with the Stars, “there’s a lot of moves you can and can’t use purely because they take a lot of time to learn,” he says. “And you’ve got to be wary about that, because if you’re stuck on these moves that are hard, the rest of the routine’s not going to live up to expectations.”

For Kristie, the hardest thing to teach is the frame – literally how a dancer holds their body, something which doesn’t tend to come naturally, or even after a few weeks of training. “As professionals, we spend years and so much money to have that perfected look and to be strong,” she says. “I know that for myself particularly, when you have a taller male, trying to get them to stand up when they’re dancing with someone that’s a bit shorter, means they’re always looking down to you.

“So you’re trying to get that connection and that look, so they’re almost looking down their nose at you. You just have to try to keep them standing up really straight.”

Kristie thinks that every celebrity arrives on the show with something that’s going to help – the ability to count beats, for example, or a knack for remembering steps. But she thinks the female pros have it harder. “Most female celebrities have done a little bit of dancing whether it be ballet, TikToks or just dancing at the club. They know how to work it, they know how to dance in heels.”

Being an emotional support dancer

The dancers also end up being emotional support partners for their celebrity. Not only are they with them all week, they’re the only one out on the floor with them, doing the same routine. “You’re their best friend, you’re their counsellor, you’re their dance teacher and a million other things,” says Brittany. “It’s super important to keep them positive and if they’re having a bad day, figuring out how to make them feel better, because all of that affects their dancing and their time on the show.”

For Brad, that includes the rehearsal and the choreography as well. “You want to do things that keep your celebrity happy”, he says. “You don’t want to push them too far out of their comfort zone, but you want to push them far enough that they feel like they’re learning something new.”

He tells his celebrities to try and enjoy every moment they get, because they never know when it’s all going to end. “You just want to be able to look back on this in the future and really appreciate what you’ve done on the show.”

Kristie emphasises that even though some celebs might not be as naturally gifted as their competitors it doesn’t mean they deserve to be criticised. “Our celebrities are putting everything they can into it, and putting their lives on hold, as well as us professionals,” she says. “I’m a mum of two kids and it’s really hard to be away from them for so much time and give everything to the show.

“Everyone is giving their absolute all – just because they’re not as talented as others, you shouldn’t give them slack on social media. We read the comments and sometimes it sucks when we’re trying so hard.”

So what makes it worth it?

“It’s that moment once you’ve done your dance. You’ve gone on live TV, you’ve completed the dance, and your partner is super happy,” says Brittany. “You just get to that end position and you’re so proud of them. That’s the best moment of the show.”

Loryn describes Dancing with the Stars the most challenging thing she’s ever taken on, but says it’s worth it. “The emotional fatigue sets in because you’re working under such high pressure physically, because of the lifts and moves we’re doing,” she says. “I’m having to push and pull the massive unit that is Eric around!

“But you’ve got to realise a bigger purpose. I’m doing it for Eric’s journey, and for our charity. The charity is the biggest reason – we both have personal connections with Autism New Zealand [and] they’re the ones that give me that little push to snap, cheer up, sort it out, move on.”

For more DWTS follow The Real Pod on Apple Podcasts, Spotify or your favourite podcast provider.

Dancing with the Stars airs on Three at Sunday and Monday nights at 7pm and 7:30pm respectively, and streams on ThreeNow.