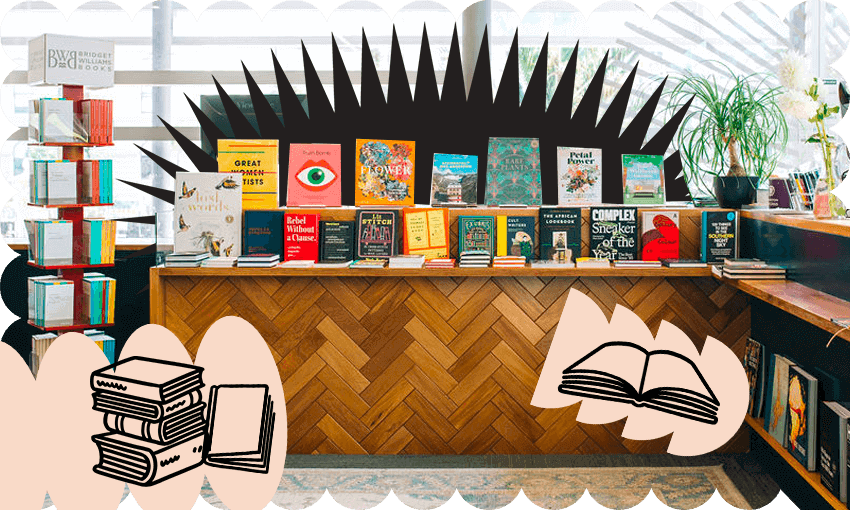 By Sarah Laing
Guest writer
Made possible by

Last week Wellington’s Vic Books announced it will shut the doors of its beloved central city Pipitea store on the 31st of July. Its cafe has already been forced to close. Sarah Laing writes.

After I separated, I could no longer afford to be a freelance writer/illustrator, so I got a job in the Wellington public sector. I joined the tribe of lanyard wearers, some strung with plain ribbons, some rainbow, some with Kia kaha te reo Māori emblazoned on theirs. On bad days they felt like the tags shot into cattle ears. I worked on the Terrace and sometimes saw Andrew Little striding down the street with his KeepCup, and Adrian Orr sitting in the window of the Colonial Cafe. I never saw Jacinda Ardern despite being a few hundred metres from parliament – she must’ve used the secret tunnel. I spent too much time in meetings talking about BAU and stakeholder engagement, big rocks and key messaging. I struggled with having to sit at my desk in a large open plan office for seven-and-a-half hours a day after years of relative freedom. I learnt to interrupt the tedium with flat white excursions (the in-house plunger coffee tasted terrible) and walks to the rose gardens to eat my bánh mì before the sauce breached the bag. On Wednesdays, I’d pass the cenotaph, admiring Joe Sheehan’s line of pounamu buttons jutting out of the pavement to remind us that this was once a pā site, and cross the road to get to the vegetable market and Shelly Bay bread stall.

Before loading up with vegetables, I might pop into Vic Books. It is dangerous to enter a bookshop – I can rarely visit one without buying something – but I would tell myself I was just keeping abreast with new fiction, or that it was research, and that it was my moral duty to support local book businesses. The bookshop was a beautiful, architecturally designed space – light and airy, with huge louvre-style windows that looked out upon the law school (the largest wooden building in the southern hemisphere) and the bus depot, across to the 100-year-old pōhutukawa trees that surround the Beehive. It had elegant light fittings and midnight blue paint detailing. The counter-front was a herringbone design, made from wood salvaged from the bookshelves of Parsons Books and Music, another iconic Wellington shop. It had closed before Pipitea Vic Books opened, and once in an interview, Igor Stravinsky called it “the most beautiful bookshop in the world”. In the north-facing windows, there was an open bookshelf filled with desirable objects – watering cans and witty mugs and bags – that I sometimes bought as gifts. The booksellers, Karen and Lisa, knew my name. In their eyes, I was still a writer. They were invested in the books I selected, telling me which ones they had liked or reviewed on the radio. Although I always ended up choosing something different, I would take one that they recommended. Because once you’ve crossed the threshold, there is never just one book.

For a while, you only needed to buy two books before you were eligible for a free coffee. The bookshop and the cafe flowed into each other, the children’s and cook books providing a natural segue. Looming at grand scale above the main seating area of the cafe was Colin McCahon’s ochre, black and white I AM canvas, putting other cafe art to shame. I usually chose to sit in the window.

I first noticed the protest on the 8th of February, driving my daughter to a Scouts event. Camper vans were parked along the yellow lines of Bowen Street, and my daughter yelled “Go get vaccinated!” through her open window. I quickly wound the window back up. They were still there when I biked into work the next day, their tents blistering the parliament green. In the subsequent days the city felt increasingly dangerous, chaotic. I hadn’t appreciated the quiet order my fellow lanyard wearers kept. “You’re sheep! Sheep! Take off your fucking masks”, a long-haired, barefoot man yelled at us as we waited in line at the bus stop. “I just want some cream in a can” yelled another woman, lurching about the Lambton Quay supermarket in a long purple frock, unmasked and also barefoot. I pinched my N-95 tighter around my nose. All around parliament the campers colonised, their cars parked illegally up Molesworth, Bowen, Bunny and Stout Streets, crammed with bedding and chilly bins and sound systems. Their children ranged free. One evening I biked past them playing on the steps up to the Beehive, chalking messages on the concrete, the sun Jesus-raying through their hair. It almost seemed bucolic. There was talk of Nazis amongst them, and of campers emptying their buckets of excrement into the harbour. “I just want my city back,” my workmate said. “They’re ferals. I want them to go.”

Vic Books had to temporarily close – who would want to walk past the blockades and the hecklers to get to the shop? Also, omicron rates were rising. “If you feel uncomfortable coming into the city, you can work from home,” my boss said. Some of us did. On the 25th of February the traffic light setting changed to red. “Please work from home if you can,” we were told. On the 2nd of March the protesters were evicted from Parliament grounds, not before setting fire to the playground.

We kept working from home. We were scared to catch Covid. We had become comfortable in our Microsoft Teams camaraderie. We paired smart shirts with comfy pants. We drank our own coffee. “It’s so great to be able to get your washing in when it begins to rain,” we agreed. We worried that we were killing our city through neglect. It depended on us, the lanyard wearers. We were an ecosystem. Would they be able to keep on making bánh mì if I failed to buy one each week? Shops emptied, cafes closed. David Jones said it wasn’t renewing its lease.

I walked down to the veggie market again in May. It had still not returned. I felt furious at the protesters for robbing me of purple carrots and cheap feijoas, consigning me to overpriced supermarket vegetables. Where were all the students? I pitied them, having to attend their lectures online. I went to Vic Books. It was still the same light-filled, calm oasis. Perhaps a little too calm. I browsed the enticing new books stand. They had it just right – not so many as to overwhelm, and stacked up in Mesoamerican pyramid formation. I chose Coco Solid’s How to Loiter in a Turf War, and Jennifer Egan’s The Candy House. Lisa was about to review the Egan on Radio Active – she hadn’t got to the end but it hadn’t come together yet and she was wondering if it would. “Let me know what you make of it,” she said, stamping my loyalty card.

“I will,” I promised. “I’m a big fan.” I returned to work with my paper bag full of books. I would try not to read them too fast. Or maybe I would read them fast and cancel my Netflix, Disney+ and Neon subscriptions to free up some funds. I felt good because I had supported a local business. It needed me. But I was not enough.

Vic Books will remain open at the Kelburn campus, and there’s a huge sale on at the Pipitea store until it closes.

Thanks to Juliet Blyth, former GM of Vic Books, for the story about the Parsons bookshelves.

You bought loads of books this week. These are the books you bought the most of.
By The Spinoff Review of Books
⚖️
10th June, 2022

The Friday Poem: ‘I will not be applying to work with you’ by Emma Sidnam