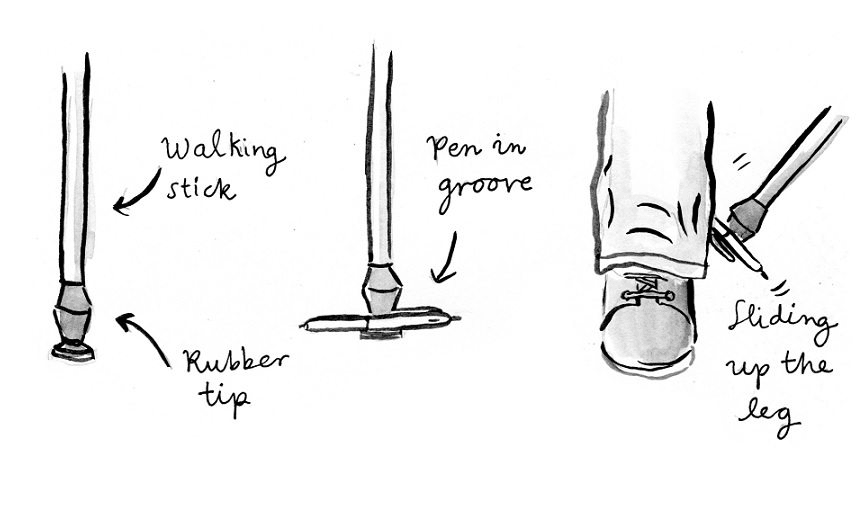 The Monday extract: On the constant presence of physical pain

By Trish Harris
Guest writer
Made possible by

Trish Harris developed acute arthritis when she was six. In this extract from her memoir The Walking Stick Tree, she ponders her relationship with her lifelong worst enemy – pain.

How do children cope with pain? How does anyone live with it? How did I manage it, survive it, and what about now? When I was growing up, pain wanted to live in my head, climb into every connected and disconnected thought, burrow into emotions, seek domination. And that’s what it tries to do, of course—rule the roost.

Someone I worked with for many years said to me, “Your identity was formed in pain.” It sounded like a huge statement to make—thunderous even. And yet it was also a very plain statement. I developed arthritis when I was six. Six is when a child’s identity is formed. My identity was formed by other things too—my family, where I lived, Catholicism. Yet her statement gave me a clue as to why my relationship with pain is so ambivalent. It’s because we became enmeshed at such an early age.

I formed a relationship with pain and we jostled for room, not only inside my joints, but also inside my head.

Pain also made me feel special—as if I was wearing a special badge. What did the badge say? Did it simply state: I know about pain? Did it raise its voice and say, “I have suffered”? Or turn up the volume and shout, “My pain is worse than your pain”? Or did it prefer to keep its message on the reverse side, whispering, “My pain is my business.”

In those years my body was a collection of recalcitrant joints that performed badly and needed constant examining. The element which fuelled it all, the inflammation that I experienced as pain, that particular fire, was private. The doctors would ask me or Mum about it. “How much pain?” “How much morning stiffness?” They tried to measure and compare it. In those days, I wasn’t asked to rank it between 1 and 10 and I don’t think I would have trusted my answer if I had been. As if I could reduce this experience to a number on an imaginary scale. This was a private relationship. At times of intensity during a flare-up, it was like I was in the middle of a civil war.

Sometime during the first few years of the disease, my parents asked the physio if we should continue living in a house with stairs or whether we should shift. I’m not sure how I know this—whether I was present at the asking/answering or if I had it relayed to me. The answer given was no, stairs would be good for me. Keep me moving. Now, as an adult, the politest way of responding to that physio is to say that she had no idea of the nature of pain—the way it screws with your head—and no idea of a child trying to grow up.

I am now in my 50s, yet pain is still a big subject. I am pecking on the surface like a hopeless scavenging hen. Peck, peck at this hard ground that never seems to yield. Today my shoulder is a bit sore and, in the back room of my mind, I am running through a few scenarios. Should I take those anti-inflammatories, hit it on the head before it builds up? Will they make me constipated? Which will I regret more, not taking the pill or taking the pill? I have decided not to take it. It’s not that bad really.

I need to declare here and now that the arthritis is no longer active in the flare-up-take-over-your-life, have-to-accommodate-pain-in-every-decision-about-an-activity way. If it was, this would be a different story. Maybe one I wouldn’t write. I don’t know. I know only that I must declare this for the sake of the people for whom that kind of pain is a live and active thing. For me, aches come and go like a low-medium hum and the painful shoulder I mentioned is rare. Reducing stress on my body over the years has helped, alongside the disease itself burning out.

I have asked myself what right I have to write about pain or what hope I have to write about it accurately, when that kind of experience is no longer my regular bedfellow. Of course there should just be rejoicing up and down my bones but, as with pain itself, there are so many layers, so many nuances to the experience that rejoicing is also a tempered thing. This is one of the biggest things I want to say about pain—the fact that it is many things all at once.

The soreness in my shoulder has dissipated now. I knew typing wasn’t the cause, which is why I felt I could keep typing this morning. It was my left shoulder and, because I use my walking stick mainly in my right hand, it’s my left arm that does all the lifting. I enjoy being able to lift. While my arms don’t have much movement, they are strong within their limited range and, in my adapted life, they don’t cause me many problems. In fact, there is something enjoyable about the gung-ho swing of being able to hiff my swimming bag into the car or lift a casserole dish out of the oven.

There is something exhilarating about being able to do it without the extra layer of thinking that goes on around pain: What’s causing it? How bad is it going to get? But this morning when my shoulder was still catching and the pain was ringing its bells, it was different. I said to myself, “I will be kind to my left arm today. I’ll open the door, lift the plate, pick up the book with my right arm. I’ll put my walking stick down so my right arm can do some of the work.”

The Spinoff Review of Books is brought to you Unity Books.