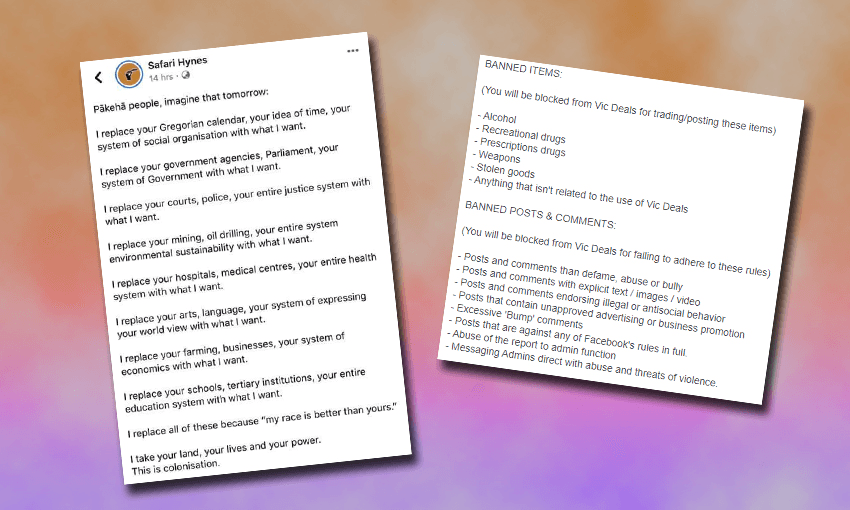 With more than 151,000 members, Wellington’s Vic Deals is one of the largest community Facebook groups in New Zealand. But in the last few days, the group’s team of administrators have landed itself in hot water after being accused of censoring content related to racism, colonisation, and Black Lives Matter.

How did this all start?

On Friday, a former member of the group Safari Hynes shared a post addressing colonisation in New Zealand. A few days later, Hynes’ post was deleted and he was subsequently blocked from accessing Vic Deals. He then took to his personal Facebook page to ask: “what do you do when you and a whole lot of people get banned from a Facebook group for trying to talk about colonisation?”

Well presumably because the group is designed to be an online trading forum for Wellingtonians to buy, sell, and trade items. Members are warned that admins will be “constantly deleting posts” to keep the page “clean, legal & relevant”. Rules state that political debate and discussion is banned, although this rule was only added in the last few days.

In that case, wasn’t it reasonable to remove the post?

In theory, yes, but content on Vic Deals has often strayed into other areas. Over time, it’s also evolved into a platform to ask for advice, look for flatmates, share memes, and post videos of brazen acts of public vandalism on Wellington’s waterfront.

So what’s been the response to the post’s removal?

While some members have backed Vic Deals’ stance, a much larger group has expressed outrage at the move. Many began reposting screenshots of Hynes’ original post while others have accused Vic Deals for trying to “silence Māori and other POC’s voices” by removing critical comments and deleting posts sharing information on Black Lives Matter. Several of those who spoke out have since reported being banned from the group.

Meanwhile, Hynes went on to create his own private Facebook group called Dic Veals. Set up less than a week ago, the group currently has well over 7,000 members and describes itself as both an online trading and political discussion forum.

Have we heard anything from Vic Deals’ admins? What’s their response been?

On Monday night, Vic Deals was temporarily shut down citing “threats to [the admins’] personal safety”. The following morning, the group posted an official statement clarifying that it did not condone “racism of any sort” and that it had deleted comments in an effort to “minimise any issues … that may cause upset or lead to in-group fighting over the current levels of racism within New Zealand”.

“We understand that this group is widely used as both a platform to ask questions and gain advice … and we appreciate that members have been utilising the group for these reasons,” it continued. “However, we are trying to monitor every post at the moment, receiving numerous reports on comments and still live our daily lives.

“A lot of the comments have lead to threats on life, personal details being shared publicly and putting others in danger.”

It concluded by stating that the future of Vic Deals would be decided by a poll with a majority voting for allowing deals with moderation but with strictly enforced rules, although some members criticised it for its lack of options. The final result remains unclear, however, as the poll no longer seems to be available.

So what happens now? Is this the end for Vic Deals?

Pretty unlikely considering the group is still 151,000 members strong with hundreds of posts being uploaded on a daily basis. But right now, a large proportion of those posts are defying rules to continue discussions on race in Aotearoa. Whether moderators crackdown on these posts in an attempt to “strictly enforce rules” remains to be seen.