Every weekday morning, a group of Auckland city commuters fight to claim one of 10 free car parks. How long can this ‘secret oasis’ last?

“Do not write this story.” Her eyes flare, her lips thin. Her warning gets sterner. “You’re ruining their lives,” she says. “Don’t drag ‘The Eye of Sauron’ in that direction. I don’t want them (the authorities) to know about it.”

These strong words come from an Auckland commuter who has been part of a secret society for the best part of two decades. Since the early 2000s, she’s been claiming a free car park on a small stretch of road in Auckland’s central city – one only a select few know about.

From 9am, the parks are free, with no time limits, paid meters, or parking wardens to worry about. She used them first as a fashion student at Auckland’s University of Technology, and later when working in town. These days, she works from home but likes to know they’re there if she needs one.

She’s protective of them. For as long as she’s been living in Auckland, those parks have been there. You just have to know how to get one. She’s asked to remain anonymous, and The Spinoff has chosen not to name the street she’s talking about.

Every weekday morning, a group of Auckland commuters go to war to claim one of those free parks. They circle the block repeatedly, counting down the clock until they can park there. They gather on side streets, idling their engines, watching and waiting for the right moment to grab one.

Some are braver, claiming a space early, then sitting in their cars while anxiously watching for approaching parking wardens, risking a $60 fine in the name of a day’s worth of free parking.

It is, according to those commuters, a “secret oasis” in Auckland’s parched parking desert. They also don’t want this story written. But telling a journalist not to write something is like waving a red rag at a bull. I have to do it.

That’s why, early on a recent overcast Monday, I find myself joining thousands of commuters on Auckland’s Northwestern motorway and crawling into town to watch this battle unfold for myself. 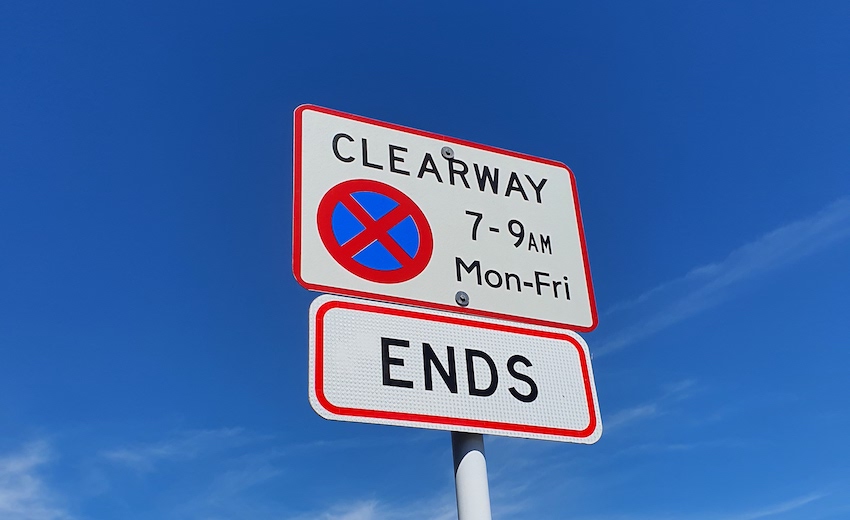 The street is designated as a clearway until 9am, meaning drivers stay put in their cars until 8.59am (Photo: Chris Schulz)

It’s 9.03am, and Paulo Munoz has spotted something he sees rarely. The IT worker pulls over to the side of the road and quickly reverses his white Mazda Axela into a gap.

He can’t believe his eyes. He’s just hit the jackpot: the last free car park on offer. And it’s just metres from his office.

“It’s an oasis,” says Munoz, gesturing his hand down the short stretch of tarmac we’re standing on. Nearby, the motorway hums with traffic, the noise nearly drowning him out. “If you see a spot you’ve got to take it – it’s free. Parking here is stress-free for the rest of the day.”

As it does for every Auckland commuter, bringing his car into town costs Munoz a lot of money. If he misses out on a free park, his options are a Wilson carpark across the road that offers spaces for $4 per half hour ($3 if you download the ParkMate app), or $15 a day ($8 with the app).

Street parking around the corner is cheaper at $1 an hour, but getting one of those can be difficult too. And the accumulated cost is still steep. For anyone working a 10-hour workday, that’s a minimum of $50 a week.

But today, Munoz is buzzing, starting his workday with a spring in his step, all because he scored a free park. He’s usually here too late. “This is always full. I don’t know what happened today,” he says, smiling.

He wasn’t there to see it, but the clamour for those parks started at 8.30am. That’s when a blue Suzuki Swift claimed the first park. At 8.45am, a second car – a Toyota SUV – pulled up. Four more cars quickly followed.

No one got out, because they were all parked illegally. The street is zoned as a clearway until 9am. Park there too early and you’re at risk of a $60 Auckland Transport (AT) fee, plus towing costs of $53.60. So commuters take their parks, then sit in their cars, on their phones, glancing in their mirrors for any approaching parking wardens, waiting for the clock to hit 9am.

“The clearway is monitored Monday to Friday and we have staff regularly checking between 8.30 and 9am to stop people turning up to score free parking before 9,” warned AT in a statement supplied to The Spinoff.

These lawbreakers were at least courteous. They lined their cars up in tight formation, making room for others. The parks aren’t painted in. But if everyone arranges their vehicle respectfully, there’s room for 10 cars.

Munoz scored the last of these – and possibly the last free park in the city. Auckland’s daily commuters deal with roads over-run with rules and regulations. They’re getting pushed out by parking meters and wardens, time restrictions, road works and road cones.

Free refuges offered by suburban streets in Ponsonby and Grey Lynn have recently become no-go zones: they’re restricted to just two hours. Your only alternatives are getting your bike out or turning to public transport.

But this is Auckland. We’re addicted to our cars. And Munoz and I are standing on the last bastion, a glimpse at a life that once was. Score one of these parks and the day is yours, free to roam the city as long and as far as your heart desires.

Most are going to work. That’s what the first woman I talk to is doing. She’s asked not to be named, didn’t want to reveal her job, and it’s easy to see why. She’s among the Auckland minority who already has a free park available to her at SkyCity, near where she works. She doesn’t want other people who use these parks to find out about her freebie. She thinks it would be frowned upon.

But her doctor told her to get more exercise, so she parks here every day and walks to Queen Street. As she grabs her bag out of her front seat, she tells me: “I need to walk. I need to get the exercise.”

The next person I meet knows immediately why a journalist is standing on the street asking him questions. “It’s free!” exclaims Marcus Richardson gleefully as he steps out of his car. He’s pulled in at 8.49am, and just three parks remain.

The architect works behind K’ Rd and is in a rush to get to work, but has time to admit he’s a free parking virgin. “I’m a novice at this,” he says. He usually catches the bus, or parks at Wilson across the road. But one day he walked down this stretch of road and said: “What’s this?”

He’d tried before but never got in early enough. But today’s different. “I know in my mind that if I get here at 8.45am this is an option,” he says. “This is the first time I’ve slipped in before 9am.”

Munoz is the last person I speak to. He’s been using these parks for years, and knows every car, every driver. “At first I used to take the bus, and I saw all these people inside their cars. I thought, ‘What’s going on? Then I started driving and I understood,” he says. “Most of the guys do it here because they can’t afford to pay and they have nowhere to park.”

Once those parks are gone, they’re gone for the day, says Munoz. I decide to test his theory. In the late afternoon, I return. He’s right, not a single car has moved. They’re sitting there smugly, scoffing at those across the road at Wilson, every driver who pays hundreds of dollars a month, thousands of dollars a year, just to borrow a few square metres of gravel until it’s time to go home.

How long can this last? In a city where car parks are increasingly being squeezed out, single-use cars are frowned upon and Auckland Transport’s priority seems to be cycleways and public transport, can this free parking oasis continue to exist indefinitely?

Once I get home, I fire off some emails to try and find out.

“It looks like a clearway from 9am … send me some questions.”

So I ask Hannan about that stretch of road. How long have those parks been free? How often do wardens check for sneaky commuters who sneak in early? What kind of fines are they risking?

Before I hit send, I add one more question: Are there any plans to start charging for those parks?

The next day, Hannan replies. He confirms there’s no other street like it in the central city, calling it an “anomaly”. Fines for anyone caught parking early are $60. And they’re monitored regularly.

Then there’s the bad news. “The parking spaces are staying,” Hannan says. “But their days of being free are numbered.”

He confirms paid parking meters are being introduced on the street within the next 12 months. “AT Parking is planning to introduce paid parking here,” he says. “This project will be included in the works programme for the 2021/22 financial year.”

It’s confirmed. The days of free parking in Auckland are over. Change is coming for the drivers who battle it out in the central city each morning – and there’s nothing anyone can do about it.

I take this news back to the woman who warned me not to write this story. I prepare for a blast. I expect her to tell me that’s exactly why she’d been so angry at me.

But she’s surprisingly circumspect. “I feel like it was a little bit of a miracle that it was overlooked for that long,” she sighs.

“We were lucky to have it while we did.”