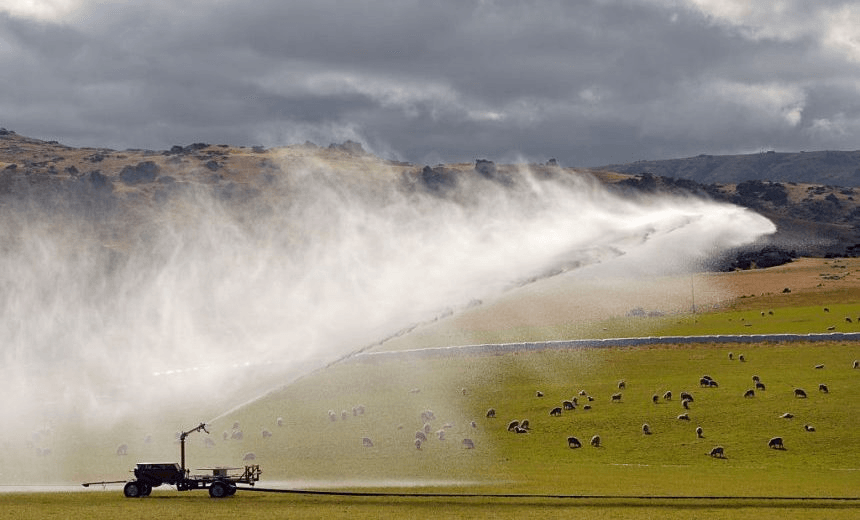 Just a couple of cents? Hardly. The opposition plan to charge for use of irrigation would impose a major burden, and it is hard to see how it would alleviate water quality problems, argues Megan Hands.

There is no doubt that water management is top of mind for many of us this election, but none more so than our farmers and growers, particularly those with irrigation. It’s struck me that using the word farmer seems to irk many, as if it has some kind of negative connotation.

The reality is that New Zealand’s farmers collectively are a group of thousands of small, often family run businesses and their employees. Many are self-employed and punch well above their weight to compete on a global scale, often up against farmers from nations who receive significant subsidies from their governments to assist with their costs of production, top up their incomes or assist them to undertake environmental works.

Irrigation dates to back the Ancient Egyptians and, simply put, we have it because we need water to grow crops or feed for our animals. In the areas of the country that have the most irrigation, rainfall can be scarce, ranging from just 300mm in parts of Central Otago, through to 500-700mm in Canterbury and Marlborough, as compared with the 1,200mm that falls in Auckland annually. Irrigation is used by some farmers and growers to supplement that shortfall in rain and to remain resilient in drought years.

What then is the likely impact of Labour’s water tax policy on these families and their communities?

On the face of it phrases like “polluter pays” or “user pays: may sound appealing, but the balancing of the environmental, social, cultural and economic needs of our communities is more complex than that.

An important point to note from the outset is that nobody in New Zealand pays for water. Even in Auckland, Watercare charges for the treatment and reticulation of water to your home or business, not for the water itself. In the same way as you pay the council through your rates or water bill, Irrigators pay for the infrastructure through consenting, drilling of wells, installation and running of pumping stations or through payments to irrigation schemes with costs of up to $800 a hectare.

When Labour’s policy was first announced, there was little detail of pricing. It appears now we are looking at a price of 2 cents per cubic metre, or 1000 Litres.

For some context, to apply 1mm of water over 1 hectare of land it takes 10,000 litres of water or 10 cubic metres. So, to supplement that shortfall of rainfall and sustain crop or pasture growth it quickly equates to large volumes of water.

To keep the maths simple, a 200ha cropping farm growing grain or grass seeds in mid Canterbury applying 500mm of irrigation water a year would have a new additional tax bill of $20,000 a year.

A 100hectare vineyard in Blenheim might use 199,500 cubic metres of water through a drip micro system and have an additional tax bill of $3,990.

Another dairy farmer well known on Twitter has calculated his annual water tax bill on his farm to be $53,000.

Suddenly a couple of cents doesn’t sound so small.

The key drivers for irrigation requirements are the soil type and its ability to hold water, the crops water demand and the evapotranspiration of the area. In the examples above, grapes have a lower water demand than pasture or grain crops. There is a great deal of science and high level of management that goes into managing irrigation efficiently.

One arable farmer at a meeting in Ashburton on Friday said that he had calculated that at 2 cents/m3 his annual water tax bill could equate to half his annual income. Another wondered aloud what happens if he has a crop failure and he receives zero income for that year but still must pay the tax for the irrigation water he used?

In districts where there are significant areas of irrigation this tax would mean millions of dollars being removed from these local economies in additional tax. In these regional areas, the small towns and cities rely on primary industry to keep them going. For Ashburton and Timaru some estimates have come in around $40 million. Tim Cadogan, mayor of Central Otago, is quoted as saying the tax will cost his district $6 million dollars. That’s millions of dollars not transferred to local tradesman, the local café or the rural supplies store.

This proposed tax has been portrayed as the solution to NZ’s water quality problems, although the more we learn about this policy the more difficult it is to link the purported benefits with the method proposed. If Labour do as they say and return the tax to the areas from which it is collected (minus the percentage that goes to iwi), the areas with the poorest water quality will only receive a small slice of the tax. This is because there is almost no correlation between swimability of rivers and irrigation.

One of the greatest concerns regarding this policy is the possibility it could make meeting required reductions in nutrient losses more difficult. Making changes on a farm to improve water quality is not cheap and any additional money squeezed out of what are often tight budgets may make it more difficult to do so. As an example, $20,000-30,000 can pay for three or four soil moisture meters to aid in more targeted use of irrigation or perhaps part of a new effluent system.

A water tax is a broad-brush approach to what are varied and complex issues. In my view identifying the contaminants causing the water quality problems for a catchment and targeting the management of those at catchment scale is a far superior approach than paying money to a government organisation in the hope that it will be returned to be spent the catchment it came from.

Last Friday David Parker, Labour’s spokesperson for freshwater fronted a public meeting in Ashburton. While I’d already been publicly critical of the approach of a water tax, I wanted to hear what he had to say in more depth than a media soundbite or the 300-word summary on the Labour party website. I’ve also long believed that there is a legitimate conversation to be had about how we should fund environmental infrastructure such as the Managed Aquifer Recharge site in Ashburton, new storm water systems or floating wetlands such as those installed at Te Arawa in Rotorua.

I was bitterly disappointed.

Mr Parker provided photos of poor farming practices to set the tone. Of the farming practices that we were seeing in the photos, not even one of them was related to irrigation and none were from Canterbury. Almost every single one of them would be illegal in Canterbury under the existing Land and Water Regional Plan putting your consent to farm or your access to irrigation water at risk of being cut off.

It is the responsibility of us all to manage our water well and that includes irrigators, towns and cities, and other commercial users. If we are going to tackle these challenges we must do it together, instead of pointing the finger at one another.

The management of our freshwater is important for our ecosystems, our businesses and our recreation. Water is precious to all of us and deserves far more sophisticated and collaborative policy development then soundbites and feel good election policies if we are to deliver the kaitiakitanga it deserves.

Megan Hands is Environmental Auditor at Irrigo Centre. She has also contracted to the department of conservation and Fish and Game. She writes here in her personal capacity.