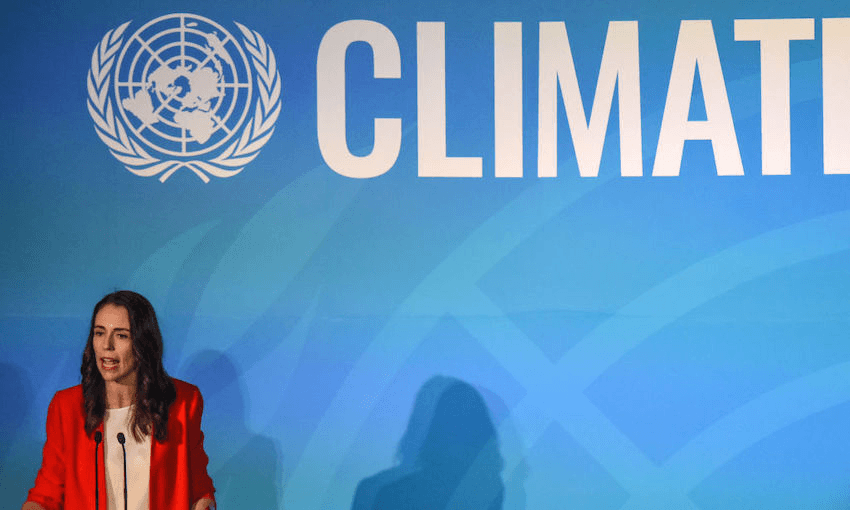 ‘No one has the luxury of copping out’: Jacinda Ardern speaks to the UN about climate change

Yesterday Prime Minister Jacinda Ardern delivered two speeches on climate change to the United Nations in New York. This is what she said.

Recently in New Zealand our journalists, like many around the world, took part in the Covering Climate Now campaign.

During this campaign one story detailed a dramatic hypothetical account of our country in the year 2050. It played out the scenario of the world missing our 1.5˚C goal.There was civil unrest, mass drought, mass diseases, and exhausted resources.

The following day, the opposite scenario was printed. A story in which we reached our climate ambitions. We had a different but thriving economy. An oil and gas industry that had transitioned into renewables.

Our farmers had innovated and were selling food to the world at a premium. The world’s biggest emitters of carbon dioxide had put their differences aside and taken action together.

And ultimately and importantly our Pacific neighbours were able to stay in their homes.

You may well argue that, based on our current trajectory, now is not the time for optimism. But if we only talk about the loss of glacier mass or sea level rises we run the risk of a society that believes all is lost and that it is simply too late.

No one has the luxury of copping out. Not those who deny climate change, nor those who believe it’s too far gone.

Now is the time for optimism and for hope and crucially a plan.

Today I’d like to suggest three related areas where collaboration, both between countries and between governments and the private sector, could deliver huge cuts in climate pollution whilst creating increased opportunity for all.

Firstly, climate change is the perfect trade opportunity. Every country on Earth is facing the same set of challenges. How do we dramatically cut emissions from energy, transport, manufacturing, waste, agriculture?

But although we have those challenges in common, our national circumstances are completely different from each other. And some of us are better at some of those things than others.

New Zealand is pretty good at hydro, geothermal and wind generation, as well as producing low-emissions food. Other countries are better at making electric cars and mass rapid transit systems.

But for too long, our trade deals have run counter to the environmental outcomes we want to achieve. Let’s start by putting climate change at the heart of our trade relationships. You’ll be hearing a bit more from New Zealand on this point.

A related area crying out for collaboration is emissions pricing.

We all know that putting a price on emissions is a critical part of the solution to reducing them, whether that’s via a carbon tax as some countries have or via an emissions trading scheme like we have. But it’s very hard for any of us to convince our domestic industries to submit to emissions pricing on their industry when their competitors in other countries don’t also face a similar price.

And so we’re trapped in a classic prisoners’ dilemma, each country not wanting to go too fast or too far before anyone else.

Surely if we’re all committed to living up to the Paris Agreement, we can find ways to cooperate on putting a price on emissions whilst still competing on the quality and price of our goods and services.

Having a network of business leaders committed to science based targets in line with the Paris Agreement creates incredible leverage and the opportunity to apply international best practice to dramatically reduce their emissions.

For example, New Zealand has one steel mill and one aluminium smelter, both small by international standards. We know that new hydrogen-based technologies are coming on to the market in other parts of the world to make both steel and aluminium with near zero-emissions.

How do we partner with other steel and aluminium producing nations and companies to roll those technologies out worldwide as fast as possible – whilst still honouring the original research and development and competitive needs of the companies that invented them?

Ultimately, if we treat the transition to a low-carbon economy as an investment, as an opportunity, then we can and should expect a return on that investment, above and beyond just merely staving off a crisis.

If we treat it only as a sunk cost and a colossal risk to be avoided, we will never galvanise the kind of action we need.

Climate scientists warn us of feedback loops which accelerate the warming process. For example, increased temperatures lead to the melting of the permafrost, which releases methane, which increases temperatures, which melts more permafrost, and so on.

Today, let’s talk about feedback loops for ambition. What processes can we kindle that will accelerate ambitious climate action, with those successes then generating even greater ambition?

Now that would give us cause for optimism and for hope.

Earlier this year I visited the remote atolls of Tokelau in the South Pacific. With a population of 1,500 people that is only accessible by boat, they have a story not often heard but a message that must be shared.

It’s a message underscored by their new coastal walls which are already toppling over from the assault by the sea. By their seaside burial grounds, which are eroding and shifting. And by the children who tell you they are worried about the future of their home.

It’s a message of urgency, one you yourself heard, Mr Secretary General, when you visited the Pacific recently.

If we are to overcome the extraordinary threat that climate change poses we all must start with an honest appraisal of our current situation. Although New Zealand accounts only account for 0.17 percent of the global total our gross emissions have increased a little over 23 percent since 1990 and our net emissions by 65 percent.

But, also as with many here, things are starting to turn around. Our gross emissions peaked in 2006. Over 80 percent of our electricity already comes from renewable hydro and wind.

And we have begun an ambitious agenda.

We have introduced to Parliament the Zero Carbon Bill, the purpose of which is to ensure New Zealand lives within the threshold of 1.5˚C of global warming necessary for the wellbeing of our Pacific neighbours. We are strengthening our Emissions Trading Scheme to more effectively price climate pollution. We aim to plant one billion trees by 2028 – 150 million are already in the ground. We have stopped issuing any new permits for offshore oil and gas exploration.

In their place we are investing in green hydrogen, biofuels and the goal of 100% renewable electricity generation by 2035. We’re making electric and cleaner cars more affordable. We’re investing heavily in rail, trains, buses, walking and cycling infrastructure.

We’ve established a $100m Green Investment Fund to help shift private investment towards the zero-carbon economy of the future.

Our business community is stepping up with a Climate Leaders’ Coalition that together represents fully 60 percent of New Zealand’s gross emissions.

Our farming leaders have made their own commitment to cutting emissions from food production. Over the next five years we will collaborate to build systems that every farmer will be able to use to measure, manage and reduce their own farm’s emissions.

We are determined to show that we can be the most sustainable food producers in the world. That’s why we will continue to lead international collaboration through the Global Research Alliance on Agricultural Greenhouses Gases.

We are determined that New Zealand can and will play our part in the global effort.

It will not be easy.

But our generation – we – have it within our grasp, not just to prevent the worst, but to build the best possible world for the generations to come.