Did you forget about Father’s Day because of all *gestures around* this? We’ve got you covered for last-minute gift ideas.

As we all stagger around bleary-eyed and confused about what day it is, let alone what month, season, or year, it is understandable that Hallmark holidays might be lower on our collective priority list than, say, containing the spread of a highly contagious variant of a pandemic virus. But we’ve got news: it’s September, it’s spring 2021, and Father’s Day is on Sunday.

With the country still living under strict alert levels, this means you might have to get slightly creative if you’ve got a father figure in your life. We put our heads together and came up with a few last minute suggestions that you can source safely.

Our very own creative director Toby Morris has written a brand new book, Dad Man Walking, which you can pre-order now. “Petition to postpone Father’s Day until such time as the courier fairies can deliver this little book of drawings. Dad Man Walking is the best and only gift for your dad and every dad,” wrote our books editor Catherine Woulfe earlier this week. We strongly suggest that you pre-order a copy from our friends at Unity here if you are in Auckland, here if you are in Wellington, send your dad an e-card of the cool cover, and breathe a sigh of relief until you forget about Father’s Day next year.

A fancy cheese is a good present for everyone (who can eat cheese), dads included. Splash out on a fancy cheese he wouldn’t buy himself – perhaps a daring blue cheese or a large truckle of vintage cheddar. Pair it with a fancy knife for the double gift of a cheese cutter and a tidy little weapon.

Most humans like learning about flora, fauna and the world around us, and many dads are humans. For only 50 bucks a year, this cool subscription will give your dear ol’ Da’ access to new issues, 30 years’ worth of the NZ Geographic archives and their back catalogue of television documentaries. It’s impossible to get parents off their tablets and their Words With Friends these days anyway, so they may as well be cramming their brains with lovely facts. Unfortunately stereotypes exist for a reason and a lot of dads really do love a beer. There are a number of local breweries that deliver (Garage Project, Hallertau etc) but don’t hold your breath for it to arrive before Sunday. A tiny silver lining to being in lockdown is that your dad will appreciate it whatever day it arrives.

A lot of dads out there always seem to have something wrong with their backs. For this reason, Stewart Sowman-Lund recommends buying your dad a Shakti mat for Father’s Day. “Despite allegedly being in pain, my dad will continue to spend hours doing things like chainsawing, painting the house, or inexplicably chopping wood that seems to just keep appearing in his yard. Shockingly, the pain gets worse. But even more shockingly, he refuses to do anything about it.” He recommends a Shakti mat as the perfect at-home remedy for stubborn dads. “Throw in some deep heat, and he’ll be back to sawing shit in no time.”

Dads often have low expectations. Meet those expectations with a kindly worded text message, that may or may not appear below last year’s Father’s Day message. Words can go a long way so you might as well type some out.

There is no greater joy in the modern world than receiving a 10 second video clip of a famous person with dead eyes hurriedly bumbling their way through some hastily-scripted well wishes for you. This Father’s Day, embrace the absurdity of Cameo and order a message from one of your dad’s favourite celebrities. Succession fan? Get Brian Cox to tell your dad to “fuck off” for $249. Whose Line nut? Colin Mochrie will hold up a pool noodle and act out dad-based comedy scenarios for $150. Sports guy? Greg Chappell is a bargain troll at only $35 a pop. 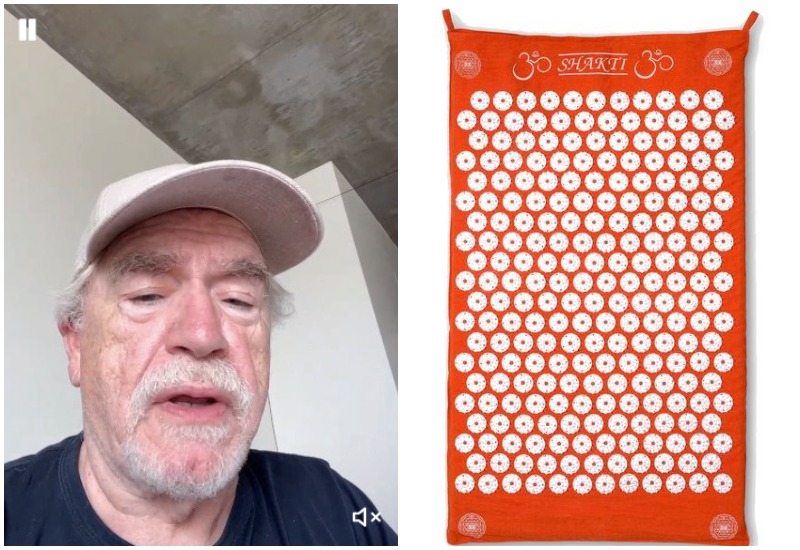 Order a Bunnings gift card or create a Bunning’s Father’s Day card or buy him a Bunnings straw hat in the hopes it will evoke the spirit of the angry tourist family and we will all have something else to talk about other than delta.

The Spinoff was missing flat whites so much during lockdown that things got desperate. Chris Schulz reckons you should go all out on a coffee machine for your caffeine-deprived dad. “What dad wants, and needs, more than anything is a decent cup of coffee from a machine that doesn’t require a properly-trained barista to operate,” he says. It’s at the pricier end of the gift guide, but Delonghi’s LaSpecialista Prestigio Manual Coffee Machine gets the job done. “After just a few days, we’re already turning out some half-decent cups of coffee. It’s so easy even a kid can operate it. Best of all? At all levels, coffee machines are considered essential deliveries. So are beans. Don’t forget beans.”

Be it of kids or other precious dad things, there are tonnes of websites like Canva, Animoto and Slidely that will help you throw together a half decent sentimental prezzo at short notice. Hell, even a Google Slide will do at this point.

The Spinoff is going to go out on a limb and assume that some dads out there like Jeremy Clarkson. Amazon Prime Video is the world’s leading purveyor of Clarkson content, with several seasons of Top Gear, The Grand Tour and his own Amazon Original series Clarkson’s Farm for your dad to make his way through. If he can parse the streaming service’s labyrinthine, nonsensical layout, then there’s a shitton of other shows old and new for him to watch. The Mentalist? The best! Endless seasons of Law and Orders and its spinoffs? Put an order in! The Carol Burnett Show? Look, she’s a classy dame. All for just $6.99 a month.

Don’t get him anything

Honestly who cares about presents, just call him on Zoom, look him in the eye and tell him you love him. Straight down the barrel, no mucking around. Make it a habit. It’ll probably last five minutes, cost you no money, and will be much appreciated.