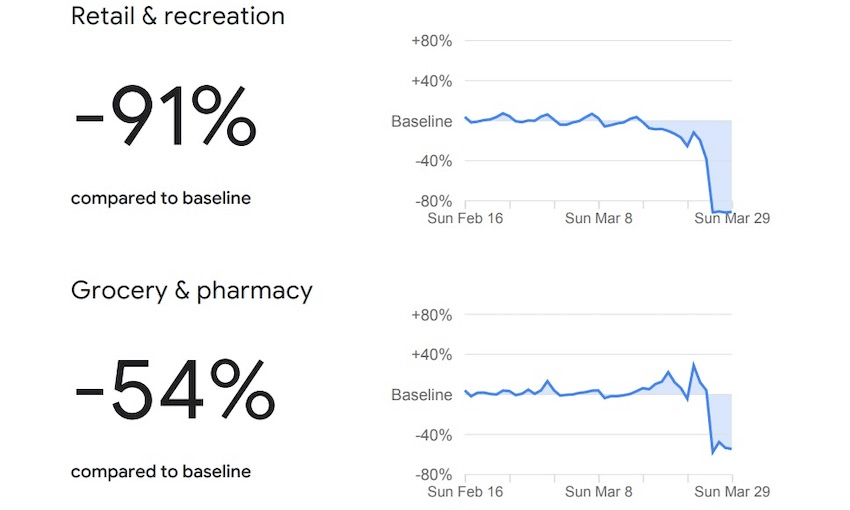 NZ had 91% less travel to retail and recreation areas in the first week of lockdown (image: google)

NZ had 91% less travel to retail and recreation areas in the first week of lockdown (image: google)

Tech giant Google has released a giant global data set which shows how different countries are locking down, and which NZ regions are most compliant with its lockdown.

A giant set of reports released by Google, created using its anonymised cellphone location data, reveals the scale of human behaviour change the pandemic has wrought. Using its Maps product to track the aggregate movements of its billions of users, the reports reveal compliance with lockdown rules within regions, and show how different countries’ rules have a direct impact on how their populace has moved since the lockdowns became widespread in March.

“The reports chart movement trends over time by geography, across different categories of places such as retail and recreation, groceries and pharmacies, parks, transit stations, workplaces, and residential,” reads the page explaining the data.

The scale of the reduction in usage in New Zealand is remarkable, with retail and recreation traffic down over 90% compared to a baseline, with a clear crash when the lockdown came into effect at midnight on Wednesday, March 25. Grocery and pharmacy, two categories that are allowed to operate, nonetheless saw custom more than halve, while park usage was down nearly 80%.

By comparison, equivalent data from the US, which has a far larger-scale outbreak, shows a far lower level of behaviour change, with around half the level of reduction in retail and recreation usage, grocery and pharmacy traffic and just a quarter of New Zealand’s reduction in park attendance. The US is still resisting a nationwide order, leaving it to states and cities to decide. In the UK, which entered a full lockdown on Monday, March 23, the numbers are far more similar to New Zealand’s, differing only in park usage, which is down only 54%.

By comparison, Italy, the country with the highest death toll from Covid-19, is showing even stronger drops in mobility than New Zealand. Mobility data to retail and recreation, grocery and pharmacy and parks is all down by between 85% and 94%.

New Zealand has had a similarly profound drop in usage of transport and use of workplaces versus residential addresses. Clustering at public transport locations like bus and train stations is down 84%, while the lockdown has seen a 59% decrease in people attending workplaces. Residential addresses have seen a smaller rise, with 22% more usage versus the baseline.

The trends are remarkably similar around New Zealand, with the largest deviation found in park usage. The regions are more likely to stay away from their parks, with Aucklanders recording a 70% drop in usage, versus a national figure of 78%.

Wellington has by far the lowest reduction in park usage in the country, with just a 63% drop, versus the national level of 78%.

Canterbury maps more closely to the country as a whole, though its level of public transport usage decline measured 90%, beyond the national average of 84% and one of the highest recorded by the data.

The report has figures for hundreds of nations and regions, and can be accessed here.