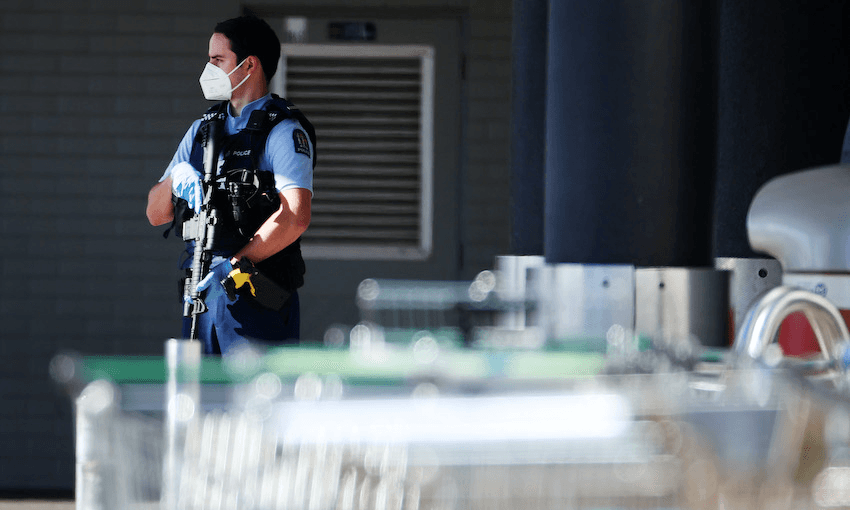 An armed police guard at Countdown LynnMall on the morning of September 4 (Photo: Fiona Goodall/Getty Images)

Would harsher terrorism laws have prevented the mall attack?

An armed police guard at Countdown LynnMall on the morning of September 4 (Photo: Fiona Goodall/Getty Images)

Our existing law possessed the tools to hold the perpetrator of yesterday’s knife attack accountable for his actions, writes Otago University law professor Andrew Geddis, who says legislation shouldn’t be rushed through in response to it.

In the wake of the Lynn Mall knife attack, there’s been a bit of an outcry about why our parliament hadn’t done more to prevent it. Driving this is a High Court decision from last year that held the man responsible could not be prosecuted under the Terrorism Suppression Act 2002, despite strong evidence that he was preparing to carry out just this sort of attack. Surely if better law had been put in place, this event could have been forestalled? And, if that is the case, surely we need to act with all speed to get such law onto our books?

Well, maybe. But before coming to that conclusion, we need to be clear about exactly what happened in relation to this particular offender (likely terrorist) and also what our parliament currently is doing in relation to the law.

Let’s begin with the particular offender. The Herald’s Jared Savage has a good summary of his past, taking into account the existence of soon-to-be-removed suppression orders that necessarily limit discussion of some aspects of his case. We can pick up the story in 2018 when (after being on the terrorism watch list for at least two years) he went out and bought a hunting knife. A search of his home then turned up the knife and some Isis-related propaganda material.

Based on these discoveries, he was charged with possessing the knife, knowingly possessing “objectionable material” (the Isis propaganda), and failing to help the police access his electronic devices. The Crown also sought to charge him with engaging in a “terrorist act” under the Terrorism Suppression Act 2002. That last charge was thrown out by the High Court, on the basis that the offender’s actions were only preparatory to carrying out such an act and so not covered by the existing legislation.

A lot has then been made of Justice Downs’ comments in this decision, that “the absence of an offence of planning or preparing a terrorist act (falling short of existing inchoate offences) could be an Achilles heel”. Indeed, he felt this so strongly that he ordered a copy of his judgment be forwarded to the attorney general, solicitor general and Law Commission. We’ll come back to these comments and what response they might demand of us in a moment.

However, before then, is it the case that this legislative gap allowed the offender to escape the law’s grasp? Well, no. He subsequently went on trial for the other offences: possessing the knife; the Isis propaganda; and failing to help unlock his electronic devices. And a jury then convicted him of two counts of knowingly possessing objectionable material and failing to assist a police officer exercise a search power.

These charges have been described in some reports as “lesser offences”. But that’s not necessarily the case. Knowingly possessing objectionable material carries a potential jail term of up to 10 years. Another individual in possession of Isis propaganda material has been sentenced to five years’ imprisonment. And, it should be noted, the government’s proposed new offence of planning or preparing to carry out a terrorist act (more on this in a moment) would only carry a maximum jail term of 10 years’ imprisonment.

The point being, our existing law still possessed the tools to hold this offender accountable for his actions; indeed, to potentially punish him even more heavily than the proposed new terrorist offence would. A judge then had to decide what sentence should actually be given to the offender. Because he already had spent three years in prison while on remand, that judge chose not to impose any more jail time but rather a year-long sentence of supervision. This put the offender back into the community under quite tight conditions, with the aim of breaking him from his extremist path. Things didn’t turn out that way, but it’s only with the benefit of 20-20 hindsight that we might now say the judge “got this wrong”.

Now, would the sentence have been different if we’d had an offence of planning or preparing to carry out a terrorist act on the books at the time the offender bought his knife? Perhaps it would, in that a judge may have felt the combination of the various offences required a jail sentence be imposed. But, equally, it may not have been; the judge may have felt that as this offender already had effectively served three years’ imprisonment and is going to have to be released at some point, it is better to try and get them on a rehabilitative path as soon as possible. We simply don’t know.

And, of course, we also need to recognise that for any offence of planning or preparing to carry out a terrorist act to apply to this offender, it would have to have been enacted prior to his arrest in 2018. Criminal law, and sentences for actions, do not operate retrospectively.

Let’s, however, look beyond this particular offender. Because it is true, as Justice Downs found, that planning or preparing to carry out a terrorist act isn’t an offence in and of itself. And there may be some situations where that gap might have practical implications – where there aren’t other criminal law provisions that may catch individuals planning to carry out some heinous actions. What should we do about that?

As Newsroom’s Sam Sachdeva covers, parliament already has been considering this matter in the form of the Counter-Terrorism Legislation Bill. Among other things, that legislation would create a new offence of planning or preparing to carry out a terrorist act. Such an offence provision is a pretty thorny issue, in that there clearly are dangerous individuals in our community that need to be combatted. However, extending the criminal law’s reach into people thinking about/talking about/making plans to do something is fraught. We don’t usually punish people for what they are planning to do, rather than for what they actually do (or, at least, set about attempting to do). The royal commission into the terrorist attack on Christchurch mosques reflected this ambivalence in its report. And submissions to the justice committee’s inquiry into the bill also echo it.

Unfortunately, it seems likely – indeed, almost politically certain – that this attack is going to override such ambivalence and lead to the bill being put on the legislative fast track. Which is a shame. As Massey’s John Battersby notes, New Zealand is “definitely a reluctant legislator when it comes to terrorism”. But if we are going to legislate here, it would be better to do it with due consideration and deliberation, rather than in the shadow of one particular event.