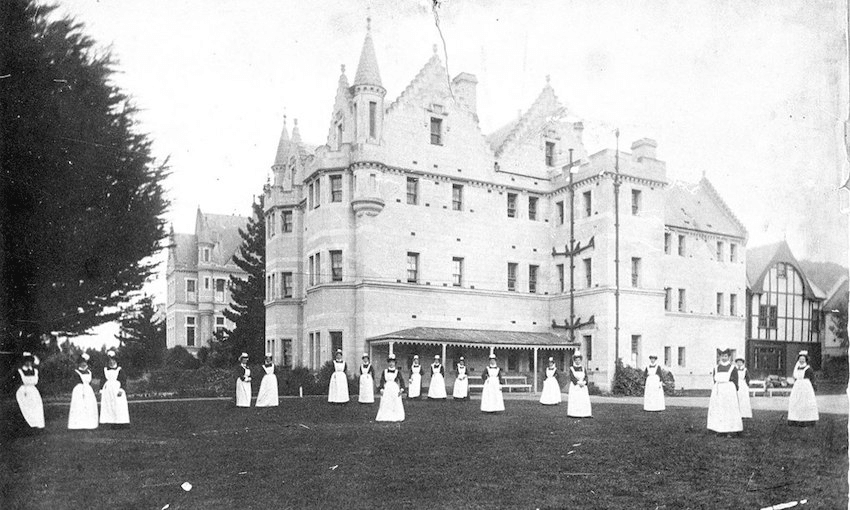 The story of Seacliff, the most haunted place in New Zealand

A short history of the Otago hospital that was initially known for its “enlightened” attitude to mental health, and later became notorious for mistreatment and abuse.

Around 30 kilometres north of Dunedin lie the remains of a once thriving psychiatric hospital. This is Seacliff, and for many it is a nightmare-inducing place that is haunted by the spirits of patients past.

The story of Seacliff begins in the mid 1800s, an era when Otago’s population soared as people flocked to the area in the hope of striking it rich in the gold fields. As the gold deposits started to dry up, workers and their families moved to Dunedin, putting strain on the city’s minimal infrastructure including its medical facilities. In 1874, architect Robert Lawson began work on Seacliff Lunatic Asylum. When it officially opened 10 years later, the main building was still being constructed – largely by unskilled patients already living at Seacliff. At the time the asylum was the largest building in New Zealand, with housing for 500 patients and 50 staff. The grand and beautiful buildings and surrounding land were unique in New Zealand, and included orchards, gardens and glasshouses, all contributing to a more “rehabilitative” model of mental health treatment than had previously been the norm.

Only a few years into operation, Seacliff’s buildings started to experience structural issues, rumoured to be caused by the lack of professional builders involved in their construction. In 1887, a landslip on the site caused serious damage. An inquiry found Lawson at fault for the faulty design and build, and he was ordered to upgrade and fix the buildings at risk. The controversy ruined Lawson’s career; he went from one of New Zealand’s most successful architects to all but unemployable.

In 1889, Frederic Truby King was appointed superintendent of Seacliff. King, who would go on to found the Plunket Society, was instrumental in pioneering new forms of treatment at Seacliff and influencing the way mental health was treated in New Zealand. Patients were given nutritious diets, encouraged to get fresh air and exercise, and were assigned jobs such as gardening. Rather than being locked in cells, they lived in villa-style houses. Staff were given professional training and clear outlines for discipline. While these initiatives suggest a relatively enlightened approach to mental health, King’s legacy remains controversial and complex. He was an enthusiastic proponent of eugenics and the racial superiority of white Europeans, and participated in dangerous and inhumane experiments on patients.

The most notoriously dangerous Seacliff resident was murderer and white supremacist Lionel Terry who shot and killed Chinese immigrant Joe Kum Yung in Wellington in 1905. Terry was initially sentenced to death but his sentence was reduced on appeal to life in a psychiatric institution. He spent the first part of his sentence in Christchurch’s Sunnyside Asylum, from which he escaped twice. After being caught the second time in early 1914, Terry was transferred to Seacliff, housed in solitary confinement, and diagnosed with “paranoid schizophrenia”. Under King’s care Terry seemed to improve, and was later allowed more freedoms such as painting and gardening. However, his mental state began to again deteriorate and he was returned to solitary confinement after assaulting a doctor who attempted to vaccinate him. It’s believed he was still in solitary confinement when he died of a stroke in 1952.

During the early 1900s rumours of patient mistreatment began to circulate. There were claims that patients were beaten, given lobotomies and received electroconvulsive therapy. One of the most shocking stories was that of ‘Annemarie Anon’, who arrived at Seacliff in 1890 and was subjected to a barbaric “unsexing” treatment which involved removing her fallopian tubes, ovaries and clitoris. In 1921 Colonel McDonald, executive of the Dunedin Returned Soldiers Association, said that soldiers who had recently served in the Great War were being held against their will, stripped of their rights and abused. McDonald told an inquiry that the situation at Seacliff was the “most unpleasant thing he had ever had to tackle” in over 25 years of military service. McDonald also believed that soldiers at Seacliff were being denied their benefits and pensions. It appears that Seacliff administrators did all they could to hide the evidence of their abuse of soldiers, and no further action was taken over the matter.

On the evening of December 8 1942, a fire broke out in Ward Five, a two-storey wooden structure that housed 39 female patients in single rooms and a 20-bed dormitory. All of the building’s windows and doors were locked and could not be opened from the inside. The fire spread quickly, engulfing the building in a matter of minutes. No one was on duty that night, but a member of staff checked on the patients every hour. The alarm was raised and an attempt made to put out the fire with hoses from a small on-site fire station prior to the firefighters’ arrival. However, it was too little, too late. Thirty-seven of the 39 patients died in the fire. Of the two who were saved, one was rescued by the staff member who first noticed the fire: the grating was pulled off her window, and she was dragged out. The other patient was rescued by being pulled out of the first floor. While the firefighters were unable to stop the fire destroying Ward Five, they did manage to stop the fire from spreading to other buildings at Seacliff. At the time, the Seacliff fire was New Zealand’s worst loss of life in a single event.

In January of 1943, an inquiry into the fire began. Coroner Dr Gray was unable to find the cause of the fire but recommended many changes for Seacliff to stop it from happening again. Moving forward, patients were to be supervised at all times, and automatic fire alarms and sprinklers were to be installed. Gray concluded that the fault was in the hospital’s bad design, and that it should have been shut down years ago. Building inspector Sidney Kershaw came forward to state that he had warned Seacliff of its inadequate fire alarms, but his warning had gone unheeded.

After the fatal fire, it appears that minimal upgrades were made to Seacliff, which continued to house and treat patients. Meanwhile, rumours of mistreatment of patients started to become more substantial. The author Janet Frame was first admitted to Seacliff in November 1945 and was wrongly diagnosed with “incipient schizophrenia”. She spent much of the next eight years at Seacliff and Avondale Hospital in Auckland, sometimes as a voluntary patient and sometimes against her will. During her time at Seacliff, Frame received electric shock therapy and witnessed other patients being beaten and trying to escape. In 1951, Frame published her debut The Lagoon and Other Stories, a short story collection which won her the Hubert Church Memorial Award in December 1952. Frame claimed that the success of her writing and newfound fame put a stop to her scheduled lobotomy, an operation her mother had already signed off on. Many others at Seacliff were not so lucky. A frontal lobotomy, which involved drilling a hole in the brain through the eye socket, was at the time believed to cure a range of disorders, from anxiety to schizophrenia. It is one of the most horrific medical procedures ever devised, with a very high risk of leaving the patient brain dead or in a vegetative state. The procedure is now discredited and outlawed. If Frame had received a lobotomy, she would likely have remained in hospitals for the rest of her life.

In the years following the fire, Seacliff began moving patients and operations to Cherry Farm Hospital seven kilometres to the north. This process took several years and was sped up after Frame and others shared their experiences at Seacliff. In 1973, Seacliff officially closed, and the buildings and grounds abandoned. After the hospital closed, explorers in the area regularly reported seeing ghosts on the grounds. Andrew Smith, who runs Hair Raiser Ghost Tours in Dunedin, has said that Seacliff remains one of the most spooky locations he’s visited: “There’s a strange vibe there, whether by day or night…. it’s closed to the general public which only adds to the mystery.”

Today not much is left on the site of Seacliff Lunatic Asylum. While a handful of buildings remain, these are on privately owned land and are inaccessible. The land surrounding the main building is owned by the City of Dunedin and is now the Truby King Recreation Reserve. The last remaining building on this site was demolished in 1992, leaving behind little more than foundations.

Hopefully those who visit the reserve today will spare a thought for those lived and suffered here, in New Zealand’s most infamous hospital.