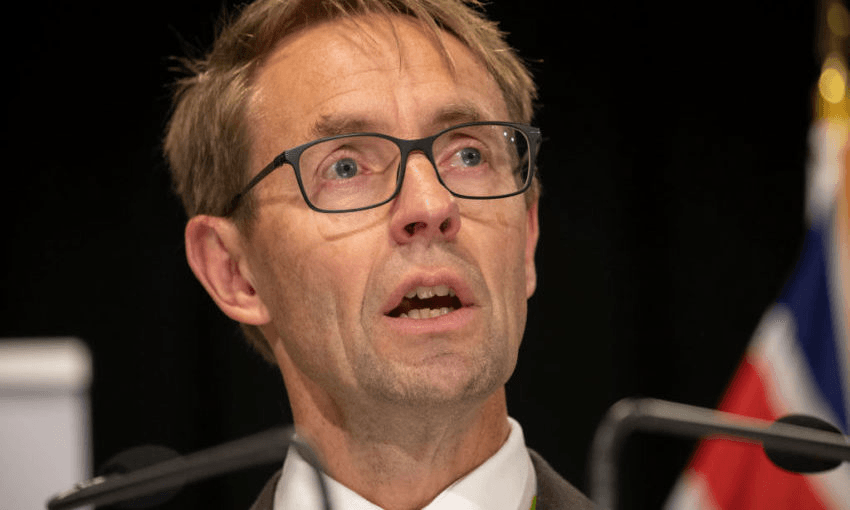 Masks, hydroxychloroquine and onions: What happens when the public pose the questions to Dr Ashley Bloomfield?

The director general of health hosted a Facebook live event this afternoon. It got a little sketchy at times.

“I’m not as practised at this as the prime minister,” said Ashley Bloomfield at the start of a Facebook live event, wherein he traded out the press gallery for some moderately screened questions from the public. The doctor has gone from a near-invisible public servant to the ubiquitous face of the health response to Covid-19 in a matter of weeks – a bookish sex symbol, a balm to frayed nerves, source of a thousand memes. He began by noting that the Ministry of Health didn’t even have a Facebook page until six weeks ago. It now has nearly 80,000 followers, and his efforts alone have the MoH on the way to giving our public a pride in our health system approaching that of the UK’s reverence for its NHS. This afternoon, following his regular 1pm briefing, he went back for more, and the session helped shine a light on some of the questions which have been gnawing at the public.

The following is an edited and abridged version of the full transcript.

What’s the criteria for an infected person to be stated as fully recovered? Is there a second test to confirm they’re 100% negative?

We classify someone as recovered if they fulfil the following conditions. First of all, it’s at least 10 days since the onset of their symptoms. And they have to have had no symptoms for at least 48 hours. Then they’re classified as recovered. One of the things we don’t routinely do – and this is the same in virtually all other countries – is test people to see if they have a negative test. The main reason for that is it’s difficult to interpret that test. Because even if it’s positive, that does not mean the person is infective.

Why are we not recommending cloth masks given increasing international scientific evidence of benefit and very low risk of harm?

I’m sure many of you have followed the ongoing debate around the use of masks, whether cloth or manufactured surgical masks or N95 masks. And whether or not they have much value. The jury is out. For every expert you will find that says there is a place for them, you will find another who says there isn’t a place. In general, if people want to wear a mask, there’s no specific harm in doing so, if you are using it appropriately. If they’re not used appropriately a mask can actually be worse, because people tend to fiddle with them a lot. That can increase their susceptibility to being infected.

Why is the Auckland cluster a secret when others are not?

I think what this question is suggesting is this could be compromising contact tracing. The cluster in Auckland that is just called a private event does relate to very much a closed group of people. All the close contacts of those people who were at that event have been contacted. So there’s no risk of further spread more widely to the public.

In all cases, these are trade-offs between privacy and the public needing to know. In the vast majority of the cases of these clusters, we are naming the organisation or the place, because there’s clearly some additional value in the public knowing. In this case, the judgement is that we’ve fallen on the side of respecting the privacy.

There are several Asian countries that seemed to be doing well that are now experiencing a second wave of infections. Has this been considered as a possibility here?

One of the things we’ve been doing right from the start is watching what’s happening in other countries, both their successes and where they haven’t been successful. I think one of the really interesting countries to look at is Singapore. You’ll have heard the prime minister talk about her talking with her counterpart in Singapore just last week. So Singapore had a very low number of cases for some weeks, just as we did. Most of the cases were related to international travel. However, over the last two to three weeks, like New Zealand, they have seen an increase in cases, and that was associated with the return of citizens and nationals back to Singapore from around the world, when there was a higher risk of them being infected.

Off the back of that, they’ve seen quite a big increase in community transmission. The number of cases is still modest when you think about the size of the population and the potential for spread there. So we continue to look to them for what’s working there, and swapping notes.

We’re not planning to do that at this point in time. Because of the very low number of cases we know are out there, doing randomised testing would not tell us anything more than what we know already from our current testing. So if you think about it, we’ve done over 60,000 tests. We’ve got somewhere around 1300 positive tests. So our positive rate from those tests – and these are all of people who had symptoms and/or were in contact with cases – our positive rate is still only somewhere between 1-2%. If we were to randomly survey people out there, we would need to do a very, very big sample of testing to even find one or two cases.

The FDA has approved hydroxychloroquine as treatment for Covid-19, and they’ve had president Trump plugging that. Is New Zealand in position to approve this or any other drug to treat this in the near future?

Obviously we’re watching any trials that are being undertaken, and we’re looking for good, proper randomised controlled trials of treatments that might be useful either in shortening the course of the illness and helping improve people’s outcomes, or in reducing the period of time that people are infective for.

What I can say about hydroxychloroquine is there’s just simply not yet enough evidence, regardless of what the FDA may say, for us to really be able to put it through our approval process as yet as a proven treatment for Covid-19.

Alert levels three and four require massive changes of hospitals, including postponement of outpatient appointments. Is there anything being planned in regards to catching up on those lost appointments?

Absolutely. We’ve been working with the DHBs very closely over the last couple of weeks on them getting detailed plans in place about how, when we step down to level three and further down the levels, they can provide as much care as possible while keeping people safe. And, in particular, how to catch up on those deferred outpatient appointments. And on deferred elective surgery and other important procedures that people need for their health and wellbeing. So they’ve got very detailed plans that they’re working up.

Is the recommended distance going to be increased?

I think the magnificent Siouxsie Wiles has done one of her postings about this particular issue. That actually if someone is infected and has respiratory symptoms that they may be able to transmit the virus up to six to eight metres.

I think the important thing here is we know in most settings that the one-to-two metre distance is perfectly adequate to reduce risk. But any physical distance intervention needs to be part of the suite of important things to reduce infection between people.

What happens when the lockdown finishes and we are let out. Will that inevitably cause another outbreak?

That’s the whole point of why we are using this strategy of elimination. Professor David Skegg last week at the select committee discussion, which I was part of, described elimination very nicely. Elimination means that we get the numbers down to either zero or a very small number and we know exactly where those cases are. And we have got in place testing and contact tracing and self-isolation there, and that we continue to do testing to find any emergent cases and then stamp them out very quickly through those public health measures.

Is it true that if you eat four onions a day, you can’t get Covid-19?

Well, I’d have to say quite honestly, there is no evidence for or against. But one thing I can say is if you ate four onions a day, you’d probably find it hard to get anyone inside your bubble to kiss you. It may well be quite a tall ask to eat four onions a day. Look, I would say this is a bit of a housewives’ tale. I wouldn’t put any money on four onions a day protecting you from Covid-19.