The best way to discover a new city – even one as car-obsessed as Auckland – is on foot, writes Chris Hall.

I moved from the UK to Auckland with my family seven months ago. My partner is a New Zealander and knows the city well but I’ve only ever stayed for a day or two here and there. I don’t own a car and I’ve been walking as much as possible to get a feel for the place, criss-crossing the city to form a mental map. I’ve always perversely enjoyed walking in cities that are built for cars and Auckland is definitely built for cars.

Auckland mostly fits Dorothy Parker’s famous description of Los Angeles – “72 suburbs in search of a city”. As soon as you’re out from the small, compact CBD, it’s suburbs all the way. I look forward to its urban density increasing. As the American architect and writer Michael Sorkin once said: “Sprawl is unsustainable. Cities are the cure.” But we’re very lucky to live in a central suburb where everything is close by – we can walk to the supermarket, the cinema, the GP, school, bars, restaurants. Urbanists call this the 15-minute city.

I love the little interstitial pockets on the city edges, that liminal zone where the suburbs meet the city proper, such as Newton. I love the volcanic cones, an unexpected feature of the city for me. One of the best things I did to initially orient myself was to walk to the summit of Maungawhau/Mt Eden, the highest natural point in the city, from where you get a great panoramic sweep. My favourite walk so far has been from Maungakiekie/One Tree Hill to Maungawhau, a great way to feel the topography – studying the phrenology of the city as it were.

Without tramping around so much I wouldn’t have noticed the neighbouring villas that each have a large frog squatting sentinel on their pillars or the thick metal girders on palm trees that help to keep rodents from nesting in them. I’d definitely have missed what appears to be a private planetarium tucked away in a Mount Eden backyard. I’ve come across the occasional mail box that’s a replica of the house it’s attached to, a very sweet “go slow, old cat” warning for cars, probably about the rather unsettling one-eyed black cat I’ve seen nearby. And all those bags of fruit hanging off picket fences (thanks for the limes; I’ll leave the feijoas for someone else). Then there’s the immaculate red, yellow and black villa where one day the autumnal leaves carpeting the topiaried front lawn seemed to have been art directed to perfectly complement the house. Beautiful.

Anyone driving past Potters Park can’t fail to see the giant Boy Walking sculpture, but only walkers will be able to see its miniature counterpart nestled in the grass a few metres away – John Radford’s delightful little bronze house, which lights up at night. (Radford was inspired by the perspective afforded by being on top of Maungawhau.)

Of course, you can’t escape the psychogeography of a new city – the memories and associations you project onto your surroundings. For me, Sandringham, Balmoral and Hillsborough are three of the Queen’s official residences scattered around the UK but here they are nearby suburbs. One nice surprise has been the variety of housing. Driving by or from the air they look all too similar (“Little boxes on the hillside/Little boxes made of ticky-tacky/… And they all look just the same” as the song has it), but up close there’s a big range – Spanish villas with tiled roofs, art deco blocks, modernist boxes, terraces … 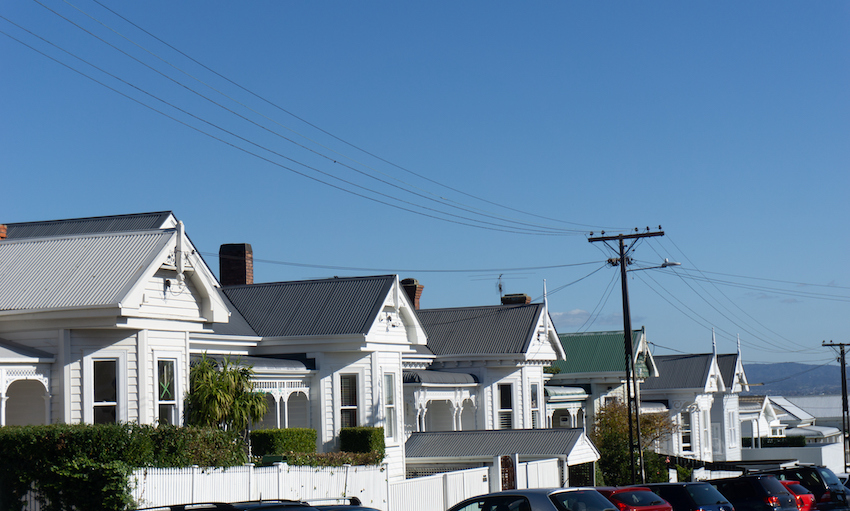 Another surprise is that while a central suburb is where you’d expect to meet people on the street I’ve barely met a soul out walking too. Though I have felt the occasional odd look for having the temerity to not be in a car, Aucklanders are a friendly bunch – when you can find one to bump into.

It’s hard to much like the gated aspect of Auckland housing – there are some lovely waist-height picket fences but equally there are plenty more hideous tall solid metal walls with security cameras. (Should I need to, I could probably reconstruct my walks by requesting Ring video footage.)

There are quite a few shonky, wonky pavements in side streets where little thought has been given to pedestrians and where there are ranks of overhanging utes and SUVs – the vehicular equivalent of a builder’s crack. Also, why don’t people reverse into their driveways so that they don’t have to blindly reverse out? I’ve lost count of the times I’ve had to quickly dash out of the way.

For how long will I be able to resist the lure of a car? Well, on one of the few occasions I’ve rented one, the satnav failed and my mobile was out of charge, and were it not for all that walking, I’d have had very little idea at all of how to get it back to the rental company. So, I’ll be taking it one step at a time.