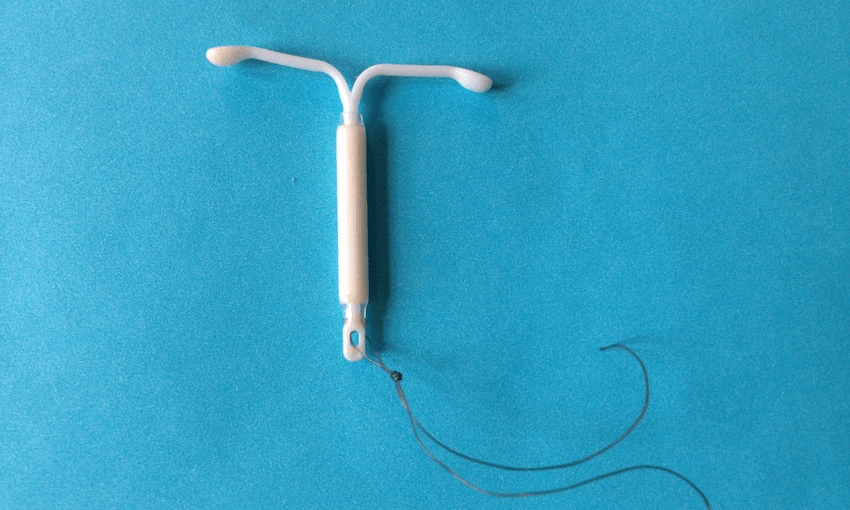 This is what a Mirena IUD looks like. Photo: Wikimedia

Free IUD contraception is here: What it is and how to get one

This is what a Mirena IUD looks like. Photo: Wikimedia

Listen up, womb-owners who love free shit and long-term contraceptive options: Pharmac announced that they will be fully funding two new long-lasting, reversible contraceptives in New Zealand from November 1, 2019. The devices that will become absolutely free for anyone who needs ‘em are the Mirena and the Jaydess, both intrauterine contraceptive devices, more commonly known as IUDs.

But what ARE they and how in the flaming hell does a little plastic thing stop a baby happening?! I called Rose Stewart, who has worked for Family Planning since 1988, to get all the hot contraceptive gossip.

It’s a massive change in terms of access because cost has previously been such a big barrier. At Family Planning, anyone under 22 can have an appointment for free, anyone with a community services card can have one for $5 and everyone else can have one for $35. In terms of the device, we were charging $340 for a Mirena and $275 for a Jaydess – that’s the minimum we could charge to not be out of pocket.

You’ll find other places charge as much as $500 for the procedure. We get a lot of referrals from general practices because they tend to charge more for the procedure and add more onto the price of the device. It’s still a lot of money either way, so to have it fully funded is just fantastic. If you get a Mirena for an 18 year old who has heavy bleeding, that’s going to save a hell of a lot of money in the health system.

How long have IUDs been around for?

Throughout history people have been inserting things into the uteruses of women and animals to stop them getting pregnant. You know, you’d put stones in a camel’s uterus to stop it getting pregnant in the desert. An ordinary copper IUD has been around for years and years. When I was a student nurse in the early ’70s, I remember a young colleague of mine getting an copper IUD and being amazed. They had already been around for ages before that.

With the Mirena specifically, that was developed in the ’80s as a treatment for middle-aged women who had very heavy bleeding and were facing a hysterectomy as their only option. It was developed as an alternative to really heavily bleeding, so started as a specialist device that only specialist doctors could deal with. But as time has passed it has been recognised as a really amazing contraceptive and as something suitable for everyone including young people.

What’s the difference between the Mirena and the Jaydess?

The Jaydess is also a hormonal IUD that is much newer. It’s made same company that makes the Mirena after they recognised they need a smaller one for smaller uteruses. If the Mirena is too big sitting in the uterus it can cause problems and pain, so IUDs always have a few different sizes. They recognised it was good business to make a smaller one that has less of the same hormone in it, so it lasts for three years instead of five.

How does all the hormone stuff work? Does it just kinda leak out… stuff?

Basically, yes. It has hormones in the stem which is a plastic device made of a type of polymer that slowly releases the hormones to prevent pregnancy. On the day of insertion we need to be sure first of all that the patient isn’t pregnant and that they’ve allowed plenty of time after the procedure to lie around with a hot water bottle if need be. Some people go straight back to work, but people need to keep their options open.

And how does the device actually get up in there?

The process itself starts a bit like a smear test. The speculum goes in as normal, we have to grasp the cervix open slightly with a clip to create traction – the uterus moves away without traction – and we put a sounding device through the cervical canal and up to the top of the uterus. We measure how long it is, and that tells us how far to put in the IUD so that it sits right at the top of the uterus where it belongs.

It goes in folded up and pops open like ‘ta-da’, doesn’t it?

It does. It goes through a tube and then pops open in the uterus. I always like to show people using my own body with my arms at my sides and then I pop them out into the ‘T’ shape. This is where there can be some pain for people, there’s potential space in the uterus but it’s not necessarily empty space. It’s more of a slit, if that’s a word you can use.

Once it is in, how does the IUD affect your period?

The whole point of the Mirena was to reduce the amount of bleeding. The first thing it does is the progestin hormone thickens the mucus around the cervix so that sperm can’t get through. It both inhibits the sperm from reaching the eggs and it thins the lining of the uterus, so the bleeding is going to be really reduced. For people who have really heavy periods, clots and flooding at nights, a Mirena can be absolutely life-changing.

We do warn people when we first put it in that there can be some light, surprise bleeding during the first year. But if you are someone who has had heavy, painful periods, you probably won’t care. It can be a bit of a change, say, for someone who has run their pill packets together and isn’t used to unpredictable bleeding.

What are the other benefits?

The other huge thing is that it’s really, really good contraception. It’s a huge mental load taken off people to have a fit-and-forget contraceptive that they don’t have to think about on a daily basis. Mirena and Jaydess are the topline for contraceptive effect because there is no user error. Still, no contraceptive can guarantee 100% – they are both 99% safe – so people still have to watch out for that rare failure. There are also cardiovascular risks in other forms of contraception like the pill around blood clots, strokes and heart attacks, but they are tiny. With Mirena and other implants, you don’t have those risks.

What are the downsides?

I always say with contraceptives that you really have to suck it and see. You don’t know which contraceptive is going to be perfect to you – you can read everyone else’s stories but that won’t be relevant to your body. It’s important to come and talk to us, get all the information, and then have it fitted and see how it feels from there. It is unusual, but some people still feel side effects from IUDs so it’s really important to check in with us. The procedure is also more invasive than popping a pill, and can be a step too far for some. It’s all about your preference and your body.

I saw a photo of a baby who was born holding a Mirena, what’s the deal there?

I’m very sure that’s a hoax. There’s plenty of examples of people who have become pregnant with an IUD in place, but they are much more likely to have a miscarriage. That’s why you have to check they aren’t pregnant before you put the implant in.

What about the legend of someone who had their IUD sucked out by their moon cup?

That one is sort of true. The IUD strings hang out of your cervix, so it’s possible that the mooncup might grab at the strings when you are taking it out, there’s a chance. But a mooncup shouldn’t be sitting that high up the cervix anyway. You just have to be a bit more careful. There are horror stories, but people always share the bad stories and nobody shares the good ones. The people who are having good experiences are the majority

What about doing yoga and kegels etc? Could it fling out without warning?

There will be some cramps on the very first day, so we advise not doing any activity after the procedure. But after your crampy uterus has gotten over its complaining, it settles down and you’ll find you can go back to normal. It’s basically in the same place that a baby grows, and think how nestled in that is. In my experience, when people have had an IUD expulsion, we pop it back in and we don’t see them again. It’s like the uterus just needs to learn what’s going on.

Finally, in all the changes you’ve seen in contraception in New Zealand, is this one historic?

It is. It’s been a long time coming and it is absolutely wonderful news. We’ve been advocating for so long, and we knew it was being considered this year, but to see it finally come through is so exciting. It’s going to change lives in New Zealand. I was doing an audit on people who have had IUD implants with us, and so many of them we just don’t see for five years until they come back to get it changed. It’s just amazing to think that people can just go out and be able to live their lives without having to think about getting pregnant. It’s contraception marvellousness.