Good morning and welcome to The Bulletin for Tuesday 30 March. In today’s edition: Arguments over responsibility for rent rises, Commerce Commission to look into timber supply, and questions asked about fake pre-departure test allegations.

Lines are being drawn over whether the government will be responsible if and when rents go up. And related to that, questions are being asked how they might prevent costs on renters getting out of control. It goes back to the housing reforms announced last week, coupled with minimum standard improvements that were required after a law change in the first term.

Finance minister Grant Robertson hasn’t ruled out putting some sort of rent caps in place, telling Newshub that he doesn’t think they will spike to a point that it becomes necessary. Radio NZ reports PM Ardern said there are currently no further plans for rental market reforms. Opposition parties National and Act are pushing hard for any sort of rent controls to be ruled out, with Judith Collins saying that when such policies have been tried elsewhere they have been a “disaster” and led to rental shortages. Is that view correct? Opinions vary. However, there’s a useful BBC explainer that explores the issue, which found roughly that it depends on what other policy measures rent controls are combined with.

And will rents actually rise? Will the sun continue to rise in the east and set in the west? Joking aside, there was a really good episode of When the Facts Change at the end of last week which covered this question, among others in more depth. One aspect of the government’s package is to keep incentives in place on new builds, which coupled with the (probably too modest) infrastructure grant funding could mean supply issues start getting sorted. But if that doesn’t happen, renters might end up with much less ability to control a market already tilted against them. See also, an explainer from last year by Stuff’s Henry Cooke that assessed whether it was possible to pick out specific legislative changes in the data. The key point: “The evidence suggests there is a significant risk law changes will drive rents up, but also that the increase is likely to be dwarfed or muted by other factors in the overall market.”

An update on yesterday’s story about timber supply issues: Business Desk (soft paywall) reports the Commerce Commission will be making inquiries, with Carter Holt Harvey halting deliveries to some customers, while keeping their own subsidiary supplied. The move has raised questions about whether CHH is abusing their market power, though according to a legal expert quoted in the story it is by no means a clear-cut case. Meanwhile, the New Zealand Timber Industry Federation put out a release, pointing to difficulties for sawmills to supply enough product to meet booming demand.

Questions are being raised about whether the pre-departure testing system is working as intended. Our live updates reports there have been 11 new cases in MIQ yesterday, ten of which came in on the same flight. A requirement of flying to New Zealand is to return a negative test within 72 hours of boarding the plane. There have been reports about people being offered fake tests before flying – the NZ Herald reports PM Ardern said she has seen no evidence of people using fake tests to get into the country.

National MPs have apparently overruled the policy position taken by the leadership against centralising fluoride decisions, reports Newshub’s Tova O’Brien. Deputy Dr Shane Reti initially ran with opposition to the government’s plan to take fluoride powers away from local government. But they in turn appear to have been outvoted by the caucus, according to an unnamed leaker. Leader Judith Collins herself tweeted that the story is “factually wrong”.

The head of Let’s Get Wellington Moving is moving on, a few months after a harsh report into the transport body. Stuff’s Damien George reports the review found that LGWM “lacked credibility and was at risk of failing”, with a lack of strategic leadership highlighted as one issue among many. Outgoing boss Andrew Body will be moving into a new role at transport agency Waka Kotahi, with an acting director to be appointed in the coming weeks.

After three decades, guilty verdicts have finally been delivered in one of New Zealand’s longest running cold case murders. Two men have been found guilty of killing Red Fox publican Chris Bush in 1987, as well as robbing tens of thousands of dollars. Logan Church at One News had a great video package on the story last night, which included footage that demonstrated what a major case it was at the time. Sentencing will take place in May.

In literary news, the release of Charlotte Grimshaw’s new book about growing up in the family of CK Stead is likely to be the biggest event in NZ’s scene this year. As books editor Catherine Woulfe noted, it “stares down” the trio of “hulking hardbacks” that Stead himself put out about his family. We asked Emma Espiner to review The Mirror Book, who found revelations in it that were both deeply personal and universally relevant. 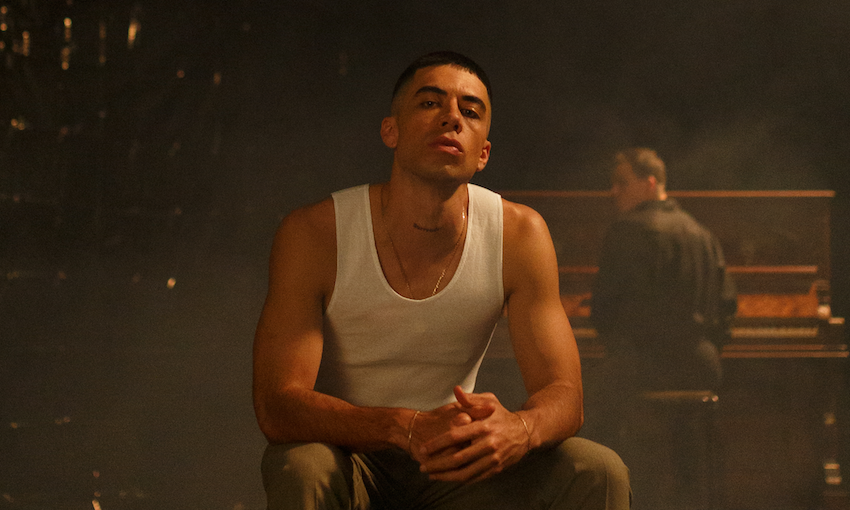 Teeks on the set of ‘Remember Me’. (Photo: Mataara Stokes)

Right now on The Spinoff: Dr Melani Anae writes about the reality of the Dawn Raids era, and why an apology for the brutal and racist policing policy is long overdue. Leonie Hayden talks to singer and model Teeks about becoming more comfortable in his own skin. James Wenley writes about the implications for the local theatre industry with over a hundred people involved with the Lion King show being let into the country. The Fold podcast talks to Mediaworks boss Cam Wallace about a turbulent first few months in the job. Mariner Fagaiava-Muller responds to comments made by a former Police Ten-7 host about crime, and about the message such attitudes send to young Pasifika people. And the final episode of this run of books podcast Papercuts is out, reviewing the latest releases from a range of local and international authors.

For a feature today, a new podcast that looks at activism through the lens of history and strategy. Blueprints is a new show from the team behind leftist commentary site 1/200, and their first episode focuses on an under-discussed but pivotal organising campaign. They give one organiser’s perspective about the Supersize My Pay campaign, which involved insurgent union Unite recruiting heavily in the fast food industry, which until that point unions had been almost entirely absent from. I say pivotal because conditions in fast food – with a young, more casualised workforce with high turnover – is the direction that much of the workforce has gone in since.

In sport today, a piece marking one year since the plug was pulled on Radio Sport. Sportsfreak blogger Aiden McLauchlin has spoken to a bunch of people who were on air that day, not knowing that just after midday the station would be taken down with no warning or notice. And it reflects on what the future holds for this part of the industry, and whether the magic can be recreated on new platforms.

Meanwhile, an outpouring of support for former Tall Blacks basketballer Alex Pledger, who has been diagnosed with cancer. Stuff reports he had been feeling unwell for months, but before the diagnosis was confirmed tests had come back inconclusive. The 33 year old said he is confident of fighting the cancer, and said he feels lucky to have caught it early enough. All the best to Pledger and his loved ones.