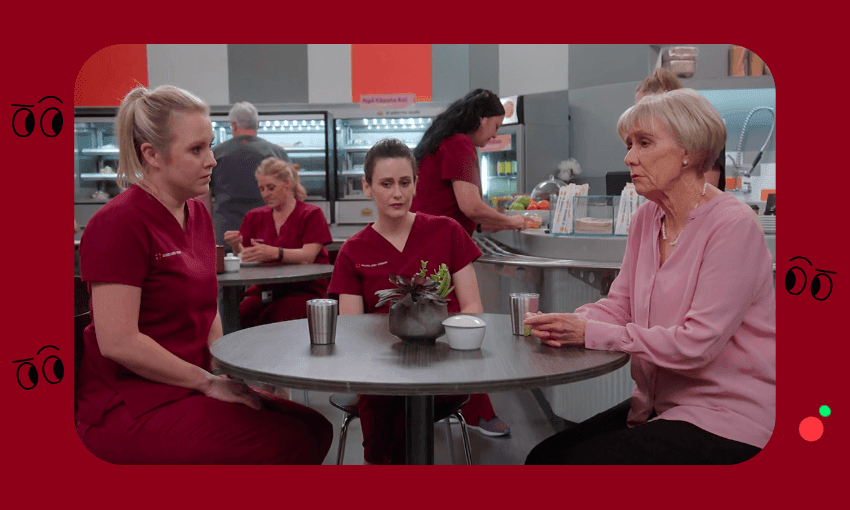 The government is set to collab with Shortland Street to promote nursing as a career. Tara Ward looks back at the main things the show has already taught us about the profession.

In a plot twist we didn’t see coming, health minister Andrew Little this week announced a variety of measures to address New Zealand’s health workforce issues – including the government partnering with long-running soap Shortland Street to encourage the recruitment of medical staff. As the country faces ongoing nursing shortages, Little said an agreement had been reached that would see Shortland Street “assist with promoting nursing as a fantastic career”.

While there are many reasons to applaud Shortland Street, the fact remains this is a hospital where the nurses (and all other staff, to be fair) are frequently very bad at their job. These people should be trusted with anybody’s health and wellbeing. They’re having affairs in exam rooms, they’re selling sex toys in the staffroom, they’re killing their patients – often on purpose. They’re out of control.

Ironically, one of Shortland Street’s current storylines is about the impact of a nursing shortage on the hospital, and the consequences of leaving an inexperienced nurse unsupervised. But desperate times call for desperate measures. In 30 years of extramural study at the Shortland Street School of Medicine, we’ve already been taught plenty of lessons about the realities of a nursing career.

1. Your mum will also get a job at the hospital and then steal your boyfriend

Think this sounds unlikely? Think again. This is exactly what happened to Ferndale nurse Tania Jeffries, who hooked up with gentle ambulance officer Ben, only for him to get the hots for her mum, Shortland Street receptionist Yvonne. Poor Tania had to watch her mother smooch a man half her age in the staffroom every day, until Ben died from being whacked in the head with a wrench while buying party ice. You’ve been warned.

2. Your Christmas parties will be absolutely lethal (and not in a good way)

Shortland Street nurses spend their working days either trapped in the lift or avoiding helicopters crashing into the carpark, but their social life is like no other. From bomb explosions at the CEO’s bach to being hurt in a plane crash, nurses are guaranteed to have a memorable Christmas party – if you survive it, that is.

3. Sometimes patients will park their vehicle in reception

If only Carmen Roberts knew about this work hazard before that fateful Christmas Day in 1995. When a Mack truck hooned into Shortland Street reception and killed nurse Carmen, Shortland Street staff learned that coming into the hospital on your day off can have fatal consequences. Carmen also once stole a winning Lotto ticket from a dead patient, but that probably had nothing to do with it.

4. You’ll spend most of your shift pashing colleagues/patients/acquaintances in the supply cupboard

There isn’t a nurse in Ferndale who hasn’t got hot and heavy while restocking the sterile bandages. Should this type of multi-tasking be encouraged? Sure, why not.

5. You’ll become a suspect and/or victim in a serial killer investigation

Back in 2007, dorky nurse Joey Henderson caused mayhem as the Ferndale Strangler, a serial killer who knocked off several Ferndale locals, including nursing manager Brenda. She’d discovered the Ferndale Strangler’s true identity – she’d even made a spreadsheet about it – but Joey found her first. RIP, Excel queen.

6. You’ll find out one of your workmates is actually your sibling

Shortland Street is packed to the proverbial rafters with secret siblings, and all nurses should automatically assume they are blood related to every single one of their colleagues. It happened to Morgan, who discovered her stalker Nicole was actually her half-sister, and then it happened to Nicole, who realised nurse Kate was also her sister.

If it could happen to nurse Dawn, it could happen to anyone. One minute you’re doing obs in ED, the next you’re sleeping in a Followers of the Light tent and obeying the creepy orders of Munter from Outrageous Fortune. I’m sure it’s fine. Consider it off-site professional development.

8. You’ll pretend to be a patient to get pregnant with someone else’s triplets

Look, you don’t have to do this, but it makes for a great story to tell the other nurse trainees. Morgan Braithwaite packed a lot into her medical career, including falling in love with a serial killer, impersonating a patient so she could get IVF treatment for surrogate triplets, and marrying Gerald Tippet so they could raise the trio of babes together. Commitment to healthcare? A+.

In 30 years of Shortland Street there have been at least four separate hostage situations and too many kidnappings to count. Never forget sweet nurse Wendy, killed in the line of duty during a hostage crisis in the hospital cafe. Wendy was a great nurse. She loved her kids, she loved a casserole. May she be resurrected to teach the nation both nursing and slow cooking skills.

Sorry, I don’t make the rules.

Shortland Street screens on TVNZ 2 at 7pm on weeknights, and on TVNZ+.