Everyone claims to be ‘sustainable’ nowadays, but who’s really walking the talk? Jihee Junn talks to some of the New Zealand businesses taking action by joining the B Corp movement.

Two years ago, nearly 200 CEOs from some of the world’s largest companies collectively agreed it was time to redefine the “purpose of a corporation”. In a statement signed by the likes of Apple, McDonald’s, Starbucks, Amazon, Pepsico and Target, America’s corporate heavyweights decided that companies would no longer function primarily for the benefit of their shareholders, but rather “all stakeholders”. This includes their customers, employees, suppliers and local communities that have traditionally been neglected in favour of maximising profits. A cultural shift was happening and big business knew it – their commitment signalled a significant change brewing.

Words alone weren’t going to be enough, though. At the time, many advocates for social and environmental change – such as the team behind B Corp – emphasised the need “to take action” in order to meaningfully realise these goals. But as many of these companies fail time and again to address their questionable work practices like gruelling conditions, discriminatory management, and excessive waste, their commitments have crumbled into little more than empty promises just two years on. Since launching in 2006, companies around the world wanting to make a positive social and environmental contribution have applied to become certified B Corporations. But becoming a B Corp isn’t just about good intentions: certification depends on a company’s entire social and environmental performance, with proof to back those claims up. Today, more than 4,000 companies have successfully certified as B Corps, including household names like Ben & Jerry’s, Danone, Allbirds and Patagonia.

In New Zealand, the demand for socially and environmentally responsible companies has grown exponentially over the last few years. In 2014, New Zealand had just one B Corp. Five years later, there were 22. Since then, that number has more than doubled to 45, most recently with the addition of Kiwibank – one of the largest companies to be certified across both Australia and New Zealand.

“I think becoming a B Corp is a real demonstration that we’re committed to being a purpose-led organisation. It’s one of the reasons we went down this journey – to ensure we had some form of independent assessment or verification around the fact that we were operating in a way that aligned with our purpose,” says Julia Jackson, Kiwibank’s head of sustainability.

“It’s also a good assessment of where we’re at, because sustainability is always a journey. You’re never really finished, and one of the nice things about B Corp is it recognises that through the points system. You’re always seeing how you can improve and what more you can do.”

Because B Corp measures a company’s entire performance, from supply chains and carbon footprint to community work and employee benefits, it’s widely considered to be the “gold standard” of environmental and social certification. The process is rigorous and can take years to complete, starting off with a questionnaire tailored to the industry, location and size of your business.

Then comes the hard part as B Lab – the non-profit organisation that certifies companies – goes through each company’s self-assessment and verifies the answers. At Kiwibank, which submitted its questionnaire at the end of last year, Jackson says it took eight months of “quite a bit of back and forth” to finally get that accreditation. And with companies reassessed every three years against a new set of standards, keeping a B Corp status isn’t an easy feat.

“It’s incredibly challenging – it took us about 14 months to get certified – and it’s not cheap either,” says Roman Jewell, CEO of nut butter company Fix & Fogg which became a B Corp in July last year. “It’s not a lip service certification, and it’s definitely not set-and-forget. Getting certified is only the start of the journey.”

Jewell, who founded the company back in 2014 and has been a Kiwibank customer since day one, says while he’s always seen Fix & Fogg as a brand led by sustainable values, “it’s one thing to say it, another thing to show it”.

“The thing I like about B Corp is it’s all encompassing. It looks at all facets of your business, like how and where we source our ingredients, our jars, our lids, as well as our carbon footprint as both an importer and exporter,” he says. “It’s a really good analysis of where your business is at, but also a bit of a roadmap [for doing better in the future].”

Julie Boucher of management consultancy Just Add Lime agrees. As social sustainability and planning lead, Boucher says the company’s main attraction to B Corp – which it was certified for in March after a year-long process – was also its “holistic view” of what it meant to do good business.

“You bandy around terms like ‘sustainable business’, but what does that mean for a professional services company like ours? Sure, it’s about the environment and the community, but it’s also about things like being transparent in our decision-making, involving staff in our policy development, and regularly having conversations with them about the business.”

Off the back of becoming certified as a B Corp, Boucher says the team now go above and beyond to maintain and improve its credentials as a sustainable business. For example: keeping track of every staff member’s carbon footprint, measuring the amount of waste it throws out every week, and even making an effort to switch to suppliers that are locally owned.

“Part of being sustainable is looking at who we get our services from, and we realised our [previous] bank didn’t align with where we were at as a company,” explains Boucher.

“So we shifted to Kiwibank less than a year ago because they were New Zealand-owned. It made no difference to our score, but as a B Corp, it’s important we have a strong philosophy of supporting local. And now with Kiwibank certified, that’s great, because I think as B Corps, we have a much better understanding of each other as organisations.” 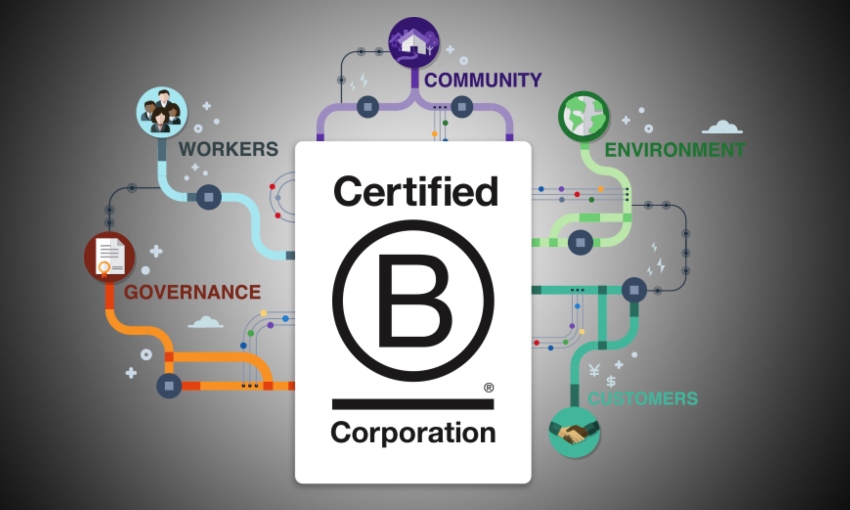 There are many aspects to B-Corp certification (Image: File)

With an overall B Impact score of 90.3 (a minimum of 80 is required for certification), Kiwibank’s Julia Jackson says she was thrilled to see its focus on customers, particularly over the long-term, and its working conditions and treatment of staff emerge as key strengths in the company’s final assessment.

“One of the things that came through strongest from interviews with randomly selected members of our contact centre and frontline team was that commitment to supporting the customer,” says Jackson. “The other areas we did well in were the benefits we introduced for our employees in the past 12 months around full health and life insurance cover, as well as our commitment to providing the living wage, and supporting diversity and inclusion which are all part of allowing people to be themselves at work.”

However, the most crucial hurdle Kiwibank managed to pass was its “responsible” banking requirement, according to Jackson. “Without meeting the minimum criteria in place around the types of sectors that we lend to, we actually wouldn’t have been able to certify at all,” she says. “So if we’d had too much exposure to fossil fuel or high risk industries like gambling, then B Corp wouldn’t have even gone through the other questions at all.”

Going forward, Jackson says Kiwibank plans on using the B Corp framework as a guide on how to further improve its sustainability goals. She says one area that was highlighted as having room for improvement was supporting its suppliers to be more sustainable, adding that work reviewing its supplier code of conduct was already underway.

One supplier that’s ahead of the curve is Springload, the Wellington-based digital agency behind the design of Kiwibank’s website and app since 2008. Certified as a B Corp status two years ago, getting certified was a no-brainer for Springload, according to people experience manager Clare Everett. Since it already had in place several measures required for B Corp accreditation, it was simply a matter of writing them out “and showing evidence of what we were already doing”, such as carbon off-setting, flexible work, and opportunities for career development and growth.

“Getting certified meant we could say: ‘look, we do all these things, but now someone has verified we do them’. It was a validation that we weren’t just making this up,” says Everett. “It also meant getting to be part of this amazing network of companies that realise business is about more than just making money.

“If every business in the world did this, I really think the world would just be a much better place to live and work.” In a 2016 article exploring the meteoric rise of B Corp certifications, it suggested that as the Apples and Amazons of the world ramp up their efforts to be recognised as good corporate citizens, smaller businesses “that have long been committed to social and environmental causes wanted to prove they were more genuine, authentic advocates of stakeholder benefits”.

As a result, becoming a B Corp meant showing you were serious (and proven) about your claims, rising above the “greenwashing” and “marketing hype” prevalent among so many businesses today. Because the reality is, many companies would rather pay lip service than risk disrupting their bottom lines. But consumers are getting smarter – they know actions speak a whole lot louder than words.