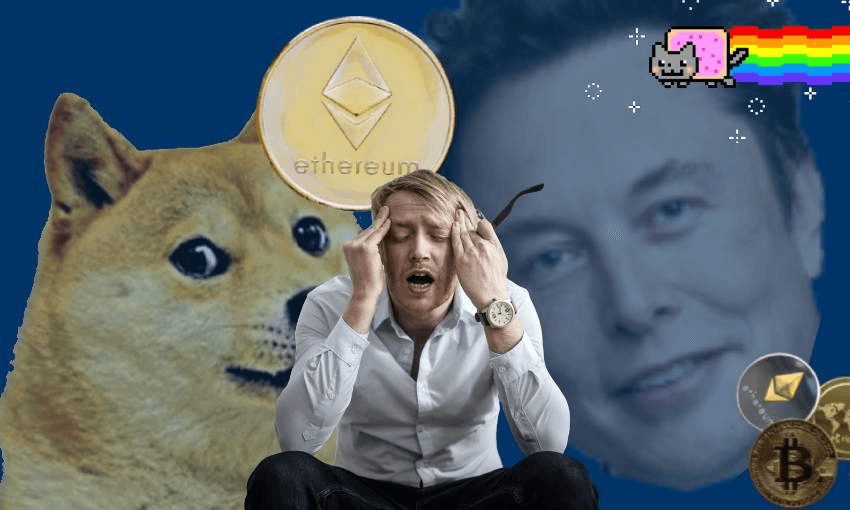 A is for altcoin: A beginner’s guide to crypto slang

It’s hard enough to understand the ‘blockchain’ without all the jargon thrown in. But with interest in cryptocurrency exploding, it’s time to get educated so you can stop being such a noob.

All right degens, listen up. Wanna ape into some shitcoins but don’t know the lingo? We’re here to help.

Bitcoins are mined through solving equations, but a lot of us can’t even solve the riddles these nerds speak in. The world of cryptocurrency sometimes seems hard to understand on purpose. It’s hard to believe anyone really knows what the blockchain is. Throw in a whole lot of new words, and most people are ready to throw in the digital towel.

Still, this new world of cryptocurrency isn’t going anywhere, and the sooner you learn what some of the lingo means the sooner you can start collecting questionable investment advice from your 14-year-old nephew. So use our handy glossary and you’ll know your defi from your degens in no time.

An alternative coin, ie. any coin that’s not bitcoin. The biggest one is Ethereum.

What are you apeing? It’s ape szn, baby! “Ape” means buying into a new coin. For example, I’m apeing HBAR this season.

Anyone familiar with investing or stocks more broadly will have heard the terms “bear market” and “bull market”. Someone “bearish” believes the price of a coin is falling, and someone “bullish” thinks it’s on the up. However, the crypto market has a couple of points in between: “baboon” and “bat”.

Feeling “batty” is when you go full nocturnal trying to get in on price dips in the hope a bull season is on the horizon. At the end of a bat season, you either transition to the wealthy bull or go full “baboon” and start flinging shit. Baboons aren’t selling all their wares yet, but they’re close. Bats are about informed tactical plays, and baboons are making irrational, panic-driven decisions.

In 2010 a man called Laszlo Henyecz paid 10,000 bitcoins for two Papa John’s pizzas. Every year we celebrate Pizza Day (May 22) to commemorate Henyecz’s loss of what is now worth over USD $500 million.

Stop me if you’ve heard this before: it’s a “digital ledger” that records “peer-to-peer transactions”. Basically, blockchain technology is the technology cryptocurrency runs on. Every time you make a crypto transaction, e.g. sending 10,000 bitcoin to your local Papa John’s, that transaction is recorded as a “block” of data that is added to a “chain”. Anyone who claims to understand more than that is either a massive nerd or pretending.

Remember the cyberpunk genre? Johnny Mnemonic and RoboCop? This is much less cool. Instead of cybernetics, our real-world web punks are melded with “cryptography”, a word I learned from Dan Brown.

Decentralised finance, or “DeFi”, is the ideology underpinning most cryptocurrencies; it’s a way to exchange money without that money going through a central bank. It’s straight from A to B.

A degenerate, more usually called a “degen”, is someone who pours a lot of time and money into new or unaudited coins, looking for quick gains. Degens don’t buy coins because they believe in the tech – they buy them because they see a get-rich-quick scheme.

The flippening is the moment a coin becomes more valuable than bitcoin. This has yet to happen, but ethereum’s day will come.

A fee sent to ethereum miners to incentivise them to process your transaction – the more you spend on gas, the faster sending ether will be.

The first block mined in a cryptocurrency’s blockchain. It’s the crypto equivalent of a birthday. Bitcoin’s genesis block was created on January 3 2009, making it a Capricorn.

Someone misspelled “hold” once, years ago, and the internet never let it go. Classic bants. If you really believe in a coin, you hodl it for years.

Anyone buying or selling cryptocurrency.

The opposite of a hodler. These hands are weak like wet paper, letting the coins slip through back into the market the minute fear or despair sits in. You are a soggy paper bear and you will never see gains.

Usually done by degens. This is pumping up the price of a coin and then selling massive amounts of it for profit, causing the price to drop and bankrupt anyone stupid enough to buy into this scheme. Dogecoin is pumped and dumped pretty regularly.

Look, no-one’s wearing hard hats and shining torches into the data abyss. “Mining” is performed by computers. This is oversimplifying it, but basically: your computer is a pick hacking away at a maths equation. When it’s solved, you get the gem: a bitcoin block (or block of your crypto of choice). There’s some variation in how different crypto networks set up their mining, but a computer is always involved, and that means power is always being used. It’s not good for the environment.

Shoot for the moon, and you will land among the stars. When a coin is on a sharp rise in price, we say it’s going to the moon, or “mooning”.

Non-fungible tokens were hot property back in March, but they seem to be dropping in value. It’s digital art (a song, a picture, a video loop of LeBron James dunking) that you can buy with cryptocurrency and have your wallet address attached to forever. Very special.

A Satoshi is the smallest unit of a bitcoin. It’s equivalent to 100 millionth of a bitcoin, or less than half a cent. Named for the person (or persons) who founded bitcoin; they went by the name Satoshi Nakamoto.

Any coin you don’t like. They’re generally bad investments and hyped up by degens. There’s a lot of overlap with meme coins, coins created as little more than a joke – some of which are now unexpectedly mooning, like dogecoin and shiba inu. Other shitcoins include cumrocket and poocoin. You get the idea.

These are coins that attempt to be stable in an extremely volatile world by attaching themselves to something else. For example, Tether is pegged to the US dollar and Digix is pegged to gold. These aren’t necessarily safe options.

You need to put your money in a wallet, right? You can put your coins on a “cold wallet” (a fancy USB), then lose it in a rubbish dump. You could keep it in an online wallet, and forget your password. If you’d prefer to buy your coins with cold, hard gold in an undisclosed location, you can also buy a paper wallet filled with coins, which is a printed piece of paper detailing your online wallet address and password.

Someone who owns a large percentage of a coin. When they make moves, we all feel it.