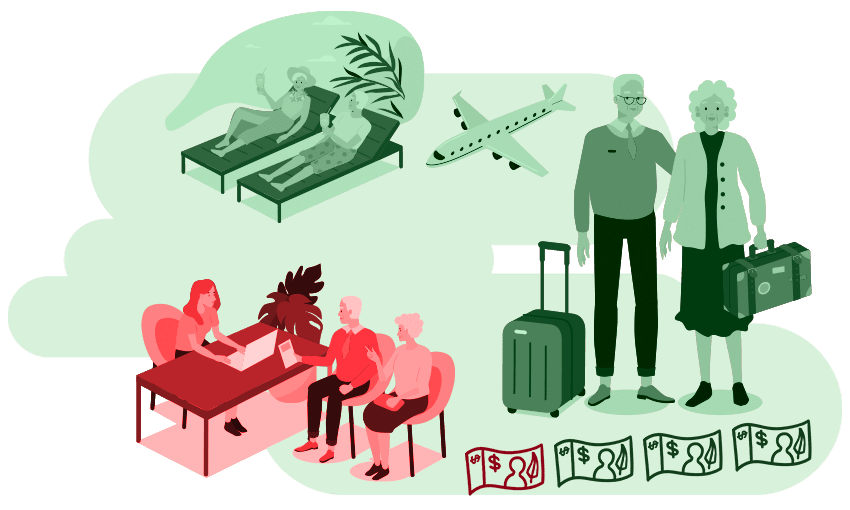 Retiring at 65 is supposed to be our chance to relax – yet the financial lead-up to retirement is anything but relaxing for generations of New Zealanders.

Ten thousand dollars a month – that’s how much Jim* reckons he and his wife will need to get by once they retire. The couple has investments, including a couple of mortgage-free properties, but that means two lots of council rates and home insurance payments. Throw in some medical insurance plus a couple of cars and “your fixed costs add up quite quickly”, he says.

Superannuation pays out under $3,000 a month to spouses, regardless of their individual incomes, so the accountant and his wife, who works too, would have a $7,000 shortfall to make up. Multiplied by 12, the pair would need $84,000 of their own money each year to get by. They could last 20 years on those costs if they had an investment pool worth over $1.5m, excluding possible returns or losses. “That gets you from 65 to 85 and you’re either dead by then or dribbling down your chin,” Jim says. “That’s roughly how I’ve looked at it.”

Retirement is his reward after three decades of working in accountancy, of which he’s spent a large chunk as a partner of his firm. He often works nearly 12-hour days, five days a week, and sometimes on weekends too. “You basically get to a point where you run out of steam. You’re mentally puffed,” the 56-year-old says. He’s eager to reclaim time to tackle his pile of unread books, hit the golf course and ski slopes and maybe take a few university papers once retired. Jim turns 57 in under a month; he’s three years away from a four-day workweek if his proposal to work fewer hours is accepted, with a view to being “completely out of the building” come retirement age. Some recent health troubles – “nothing major” – have partly jump-started these plans. “And then you start to add up your pennies and go ‘can I afford to retire?’”

There is no official retirement age in Aotearoa, but many people stop working at 65 – the age when New Zealand Superannuation and some other pension payments kick in. In an environment of rising inflation and living costs, low wage growth and volatile sharemarkets, retirement is a major concern across generations. Those in their 20s, 30s and 40s have turned their attention to it, mostly because of Kiwisaver. The voluntary savings scheme, which the government introduced in 2007, is one of the best things that has ever been invented, Jim says. “New Zealanders are very average at investing. We can save alright periodically, but then we spend it. Savings are just deferred expenditure.”

Ensuring you’re in the right KiwiSaver fund could mean tens if not hundreds of thousands of extra dollars come retirement. Analysis from digital KiwiSaver advice platform BetterSaver suggests a 35-year-old earning the national average wage is at risk of running out of their KiwiSaver savings less than four years after leaving the workforce for good. At 65, they would have about $468,000 – roughly the same as having $264,000 today once inflation is taken into account. The value of a dollar is plummeting, says BetterSaver chief executive Joe Taylor. “Even in years with more stable inflation rates, a conservative or balanced KiwiSaver fund can barely keep pace with inflation over the long-term. A few hundred thousand dollars might seem like a lot today, but it won’t be nearly enough to retire within a few decades.”

The unaffordability of retirement is not just an issue for the young, either. A recent survey of 1,000 pre-retirees, or those 10 to 15 years out from retirement, found that many lack a sense of financial security and confidence about their retirement. Two in five said they didn’t feel prepared at all financially for retirement, almost a quarter said they worry about money at least weekly and only one in 10 said they felt financially secure.

The report, commissioned by New Zealand Seniors, an insurance specialist for over-50s, is coloured by two years of pandemic living – the disruption caused by Covid-19 has led nearly two in five pre-retirees to stray from their ideal retirement plans and a third have felt the pandemic’s impact on their job security. The pandemic has thrown existing issues – housing, finances, employment and travel, for instance – into starker relief. “There were many that, pre-Covid, were thinking about these things but it’s certainly become more front and centre for people,” says Age Concern chief executive Karen Billings-Jensen. And the pandemic has made people realise just how complex the transition is. “It’s not as if you stop work one day and wake up the next day and think ‘gosh, what am I going to do?’” she says.

Billings-Jensen says people should start thinking about retirement earlier – a longer lead-in time often means more flexibility to shift away from work on one’s own terms. Two-thirds of survey respondents found a gradual reduction in work commitments more appealing than setting a hard-and-fast retirement deadline. That might look like reduced hours, working part-time, job-sharing, retraining or mentoring younger colleagues. Retirement is no longer “turning 65, getting the gold watch [and heading] out the door”, she says.

Barring any unforeseen financial shocks, accountant Jim is confident he and his wife will retire by 65 because they started planning early. “Time is your biggest ally. If you start early and save a little bit often when you’re young enough, actually it adds up to a whole heap of money many years later,” he says. The pandemic may have thrown innumerable curveballs over the last two years, but it’s made him laser-focused on retiring on his terms. “If you’d asked me seven or eight years ago, I would’ve said I’d probably still be working when I’m 70. Well, now, I can promise you I won’t be.”