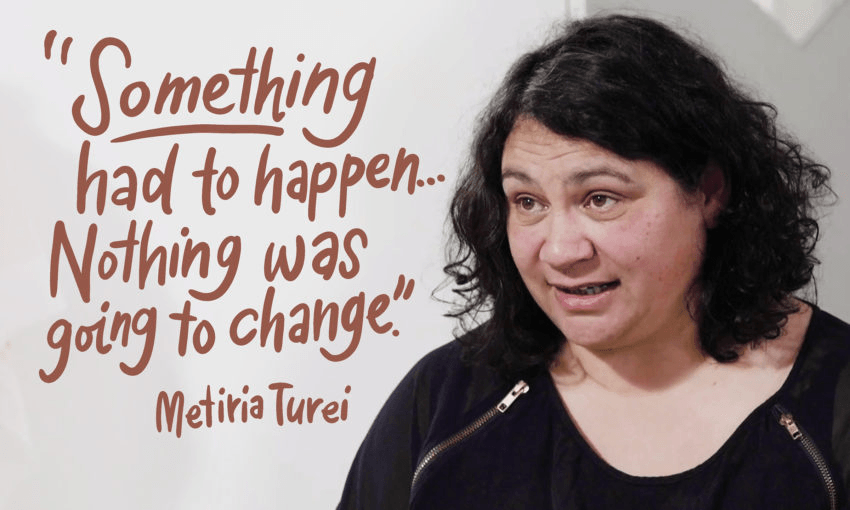 Watch: Metiria Turei opens up on a life in politics, art and activism in Two Sketches

By Two Sketches
Guest writer
Made possible by

At the last election, Metiria Turei stood down as Greens co-leader amid the controversy that followed a personal and polarising speech, the reverberations of which are felt to this day in the party. She has since stayed out of the public spotlight and immersed herself in art and performance. In a rare interview, she sits down with Toby Morris at her Dunedin studio for a spot of drawing – and stitching.

A couple of months before polling day in 2017, Metiria Turei changed the trajectory of the campaign, and very probably the direction of politics in New Zealand. In a speech at the Green Party AGM, the co-leader addressed the state of New Zealand’s welfare system. She recounted her own time on the DPB. And she admitted that she’d lied in order to make ends meet for herself and her daughter.

That speech led to a leap in support for the Greens. That, in turn, saw Labour slump, and its then leader, Andrew Little, stand down. As Jacinda Ardern delivered an unimaginable surge for Labour, it was the Greens’ turn to slump, as news media drilled down into the details of Turei’s past. The government changed, with the Greens for the first time taking their part of power. A casualty of that turnaround, however, was their co-leader. Turei had resigned the co-leadership and her place on the party list. She all but vanished from public life, and enrolled at art school in her Dunedin home.

More than two years on, she does not regret that speech. In her first major interview since the election, with The Spinoff’s Toby Morris as part of the Two Sketches webseries, she said she stood by the speech, its message on behalf those on benefits, and its impact in shaking up the election – despite its “traumatic” effect.

Had the campaign continued in the “same old” fashion, the status quo would have prevailed, she said.

“We got the highest poll the Greens have ever had in the week after my speech. I think something had to happen to make a change of government a possibility, a real possibility.

“As traumatic as it was for a tonne of us, the outcome that I wanted was achieved.”

Asked if she missed the world of politics, Turei said: “Some days I miss it when I see people who are doing certain jobs and think, ‘Oh, you’re doing a shit one. Honestly could you just … We fought really hard to get you fellas in government. Can you please just do it properly?’”

While she enjoyed shouting at the TV, she ruled out a return to parliament. “I wouldn’t go back. Being able to wake up in your own bed and live your own life and not be in such an aggressive environment is just so fantastic. Plus, I just think too that there’s a time when you make your contribution, and you move on. It’s not a job for life, that one – well, OK, for Winston …”

And what of her former colleagues in the Green caucus? “They’re doing good. The new generation of MPs is a whole new beast and thankfully so,” she said.

“I’m really pleased with the resilience of the organisation … When you’ve led an organisation for a real long time you want it to be real strong. And they are, so that’s great. They’re in government, and they’re doing amazing things just like we always promised we would and that’s marvellous.”

She is not in contact with her old colleagues on “a day to day basis” but she did catch up with some of them: “It’s really nice when they come and visit and give me all the gossip.”

“My side is doing a fantastic job – Marama,” she added, name-checking her successor as female co-leader of the party, Marama Davidson. “Other people are doing my job, and they just don’t need me grumping from the back room. It’s a hard enough job to do anyway.”

Turei also reflected on the parliamentary walkout she inspired in late 2015, in protest at the Speaker’s refusal to admonish the then prime minister John Key, over his declaration that MPs who had raised concerns about New Zealand citizens in Australian detention on Christmas Island had been “backing the rapists”.

She and a series of opposition MPs stood, said they were victims of sexual assault and were expelled from the house by the speaker, David Carter.

“For those women who joined me, I think they were incredibly brave because it was something that they just felt really strongly about doing.”

It was, she said, “a real indictment on the parliamentary process that the speaker couldn’t handle it and there was an inability to understand real life. It was really apparent just how incapable the parliamentary system was.”

Turei said she was pleased to see the publication earlier this year of The Francis Report, commissioned by Trevor Mallard, which found that bullying and harassment had become “systemic in the parliamentary workplace”.

“It’s so good. It’s such a good thing for them to be doing. And I know it’s really tricky … It’s never going to be a perfect inquiry, and there never can be. But there are all sorts of stories all the time about behaviour, not necessarily sexual shenanigans or sexual assault behaviour, but just aggressive, shitty behaviour.”

Last year Turei completed a graduate diploma in visual art. “It was fantastic. It’s really scary doing something completely new like this. Making isn’t new, but having people look at it and try to assess whether it’s any good, that’s all new. Thinking about being an artist is completely new.”

In the Two Sketches series, Morris and a guest chat while each draws a picture. In this latest episode, Turei’s “drawing” is an embroidery, based on her interest in what she describes as “old lady superheroes”.

Two Sketches is made with the support of NZ On Air. Watch earlier episodes, with Michel Mulipola, Sharon Murdoch and Sam Orchard, here. Subscribe to The Spinoff’s YouTube channel here to see all our video series.