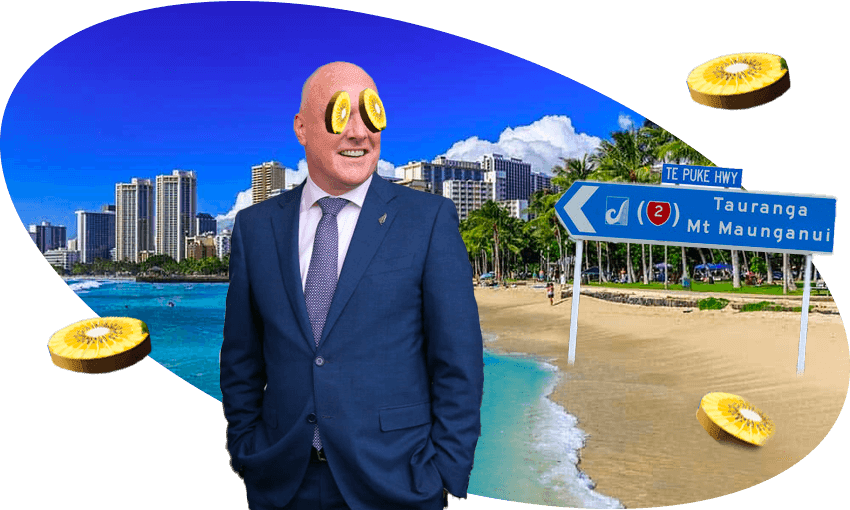 Should Christopher Luxon have stayed in the heart of kiwifruit country instead of holidaying in the rainbow state? We weigh up the pros and cons of each destination.

A video posted to National Party leader Christopher Luxon’s Facebook last week opened with the unambiguous statement: “Listen, today I’m in Te Puke, the heart of kiwifruit country.” Today, however, he confirmed to scandal-starved press gallery journalists that this was not true. “I was on leave last week with my family. I went to Hawai’i with my family as I tend to do in July,” Luxon said.

He had, however, been in Te Puke the previous week, and the main thing this whole saga goes to show is the importance of adding a #latergram hashtag to your posts. It also raises an important question nobody has really stopped to consider before: Te Puke or Hawai’i?

With the cost-of-living crisis and New Zealand businesses desperate for more visitors, should Luxon – and the rest of us – be holidaying closer to home? Let’s consider the pros and cons.

Te Puke mayor Garry Webber said there was absolutely no question where you should visit next. “[Te Puke’s got] all the amenities of big cities but not the population or congestion,” he argued when approached for his two cents. “If you go to any of the beaches, from Mount Maunganui to Whakatāne, there are kilometres of open beach as good as anything you’ll see in Hawaii. You don’t have to share it with a whole lot of international tourists.”

Webber has been to Hawai’i before, but said he cut his trip short to return back to Te Puke. “The beaches were so damn crowded. We were booked to be there for a week. After three days, I said to my wife, ‘I’m out of here.’ It just wasn’t for me. I’m a country boy at heart. There were just so many people there.”

Webber makes a compelling case, but since he is literally the mayor of Te Puke he might not be the most objective voice. Let’s compare the options for ourselves.

Firstly, the tourist attractions on offer in both locations. According to the 100% Pure New Zealand website, Te Puke has just one activity on offer: for the reasonable price of $18-$20 you can visit a kiwifruit orchard and learn about “the story of kiwifruit”. In case you hadn’t worked it out already, Te Puke is big on kiwifruit – there’s a giant monument of one you can visit. Hawai’i has a slightly longer list of attractions, but none of them are kiwifruit-based. For fans of the furry fruit, the decision is easy.

If monuments and tourist attractions aren’t your thing, let’s consider the call of the great outdoors. Just out of Te Puke you’ll find Mount Maunganui, with its amazing cafes, beautiful beach and a range of walks offering ample Instagram opportunities. Honolulu’s popular Diamond Head is pretty much the same thing. And while Hawai’i may be home to some of the world’s most scenic beaches, Te Puke’s swim school also has clear water and warm temperatures, and it boasts a 4.9 star Google rating (0.3 stars higher than Honolulu’s iconic Waikīkī Beach).

Finally, we must consider the shopping. While Te Puke may not be able to compete with the upmarket retail therapy on offer in Honolulu, it does have a place named Giftwrapt, a hardware store called XCetera and, most importantly, a Caroline Eve. As mayor Webber says: “all the amenities of big cities”.

Ultimately, it comes down to personal choice. For many, the pull of the annual family holiday in Hawai’i will be too strong. For the rest of us, it’s worth considering a trip to Te Puke: New Zealand’s Hawai’i.