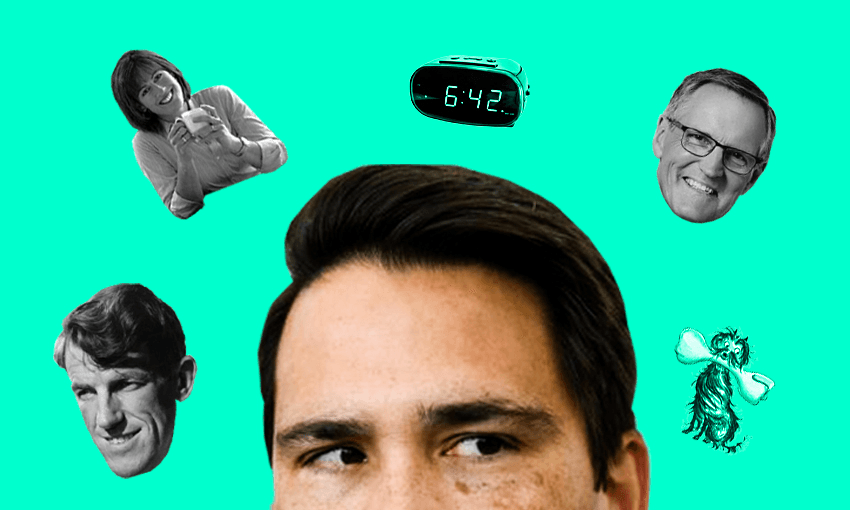 Inspired by Bridges’ brave stand against the evil wokesters, Emily Writes unearths other examples of the woke peril.

This week, Simon Bridges described NZ Police’s Andrew Coster as a “wokester commissioner” who isn’t fit for the job. The “too nice” Coster is not arresting enough baddies, you see.

When asked why Coster was a “wokester commissioner” Bridges replied: “because he is”. You simply cannot fault that logic.

It’s absolutely time to stop the stinking tide of woke extremism that is flooding our media and public service. I stand with Bridges and all of the mighty crusaders against wokeism.

Let’s start with a list of people who are definitely too woke to be left alone when we could be abusing them on talkback for being woke.

With this softly softly approach from our wokester commissioner, expect gang and gun violence to continue to worsen https://t.co/pgmQO5swiH

Peter Williams recently became woke when he realised that radio slots for politicians are simple PR. It took him around 150 years to realise it, but we can finally accept that Peter Williams is as woke as they come. Doesn’t trust the government? Woke. Wants accountability? Woke AF. Views his role in media as challenging people in authority? Faaaaarken woke.

Biden the octopus at the Island Bay aquarium. His name is Biden. Woke. Also practises collectivism by sharing his shells.

Libraries are communism in action. If you want to read a book, pay for it yourself. Why should I have to pay for your book? Making books free is communist. It’s also socialist. It’s communist socialist.

Hairy Maclary is a woke dog teaching our kids woke shit like the idea of working together as a collective for a shared goal. His mates are a woke gang that should not be friends but somehow are, simply because they have a shared love of sausages and their desire to get those sausages. Hercules Morse, Bitzer Maloney, Muffin McLay, Bottomley Potts, Schnitzel von Krumm have no similarities and certainly are not the same breed. That kind of multiculturism is Woke 101. Time to put Maclary down.

Sir Edmund Hillary might be considered one of New Zealand’s most beloved people for climbing a mountain, but the reality is, his wokeness is as big as Everest. Despite being dead he recently raised over $25,000 forCovid-19 Emergency Response in Nepal. These funds paid for an initial shipment of Personal Protective Equipment (PPE) and medical supplies, which were delivered in April to Phaplu hospital and half a dozen clinics in the southern part of Solukhumbu District (Everest region). This was all through his foundation which works toward supporting woke shit like “health” and “education”.

Australian prime minister Scott Morrison is today guest of honour at an International Women’s Day event which sounds very woke to me. What about International Men’s Day? Also, he said that after talking to his wife he now knows rape is bad. That is so woke I can’t even get my head around it.

The Business Roundtable is a union for employers and unionism is woke. They unite people from the same class in solidarity with one another – there’s no other way to describe this but extreme fundamentalist wokeness.

The Briscoes Lady is a woke, socialist tyrant who is constantly looking for discounts to game a capitalist system. Briscoes sales are handouts designed to stop people working hard. WOKE SHIT.

Roads are extremely woke. Roads of national significance promote unity and connection, bringing people together. They’re paid collectively and are free – two hideous woke concepts that suggest we have things that we need as a country and will work together to provide them.

Hobbits are woke because they model communal living and mutual aid. Sharing meals? Sounds like extremism to me.

Churches are possibly the most woke of everything on this list. Feeding the needy? Make them pay their own way! Providing shelter? How will someone learn to put a roof over their head if you don’t leave them homeless? Compassion? Empathy? Service to the community in an exchange that doesn’t require anything in return and is done purely as a way of life? Sounds like Jesus was the original wokester.

The Taxpayers Union is a union. Which is enough evidence. But here’s more: they use their time to push for a socialist society based on economic democracy by loudly protesting every week against the use of funds to fill capitalism’s inherent effective demand gap. They also paid back money to the government that they didn’t need, so it could be used for those who actually need it, which is a very woke thing to do. They’ve proven they might just be the most woke organisation in New Zealand.

Parliament is woke because its sole reason for being is to represent the people as a collective. MPs are servants to citizens – therefore Simon Bridges himself is woke

And that’s just a few of the worst wokesters in New Zealand. I’m sure you’ll also be able to share examples. We must never sleep on the battle against WOKE, an entirely meaningful term that in no way has been co-opted by the right to mean “anyone who disagrees with me”.