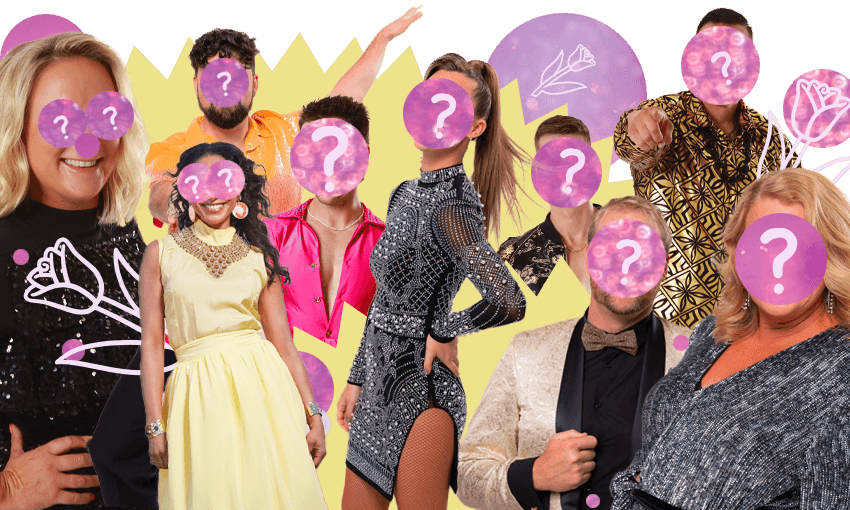 Meet Dancing with the Stars’ celebrity contestants for 2022

After a three year absence, Dancing with the Stars NZ is back. In a bold move of her own, Tara Ward power ranks the brave celebrities ready to sashay onto our screens.

It’s been three long, cold years without Dancing with the Stars NZ. Some might blame Covid-19 for the absence, but I think you’ll find the fault rests at the feet of my esteemed colleague Sam Brooks, who foolishly tempted fate in his last DWTS NZ recap of 2019:

Luckily you can’t keep a good dancer down, and with the easing of Covid-19 restrictions, DWTS NZ season nine begins later this month. Today, Three announced the names of the nine courageous celebrities who will compete in the DWTS NZ ballroom of dreams. They’re about to grapevine into our hearts and wallets, raising money for their favourite charities and reminding us that dance is a leveller like no other.

In honour of DWTS NZ’s return, we dedicated several minutes to evaluating the dance potential of these famous people. We studied their photos and analysed their PR blurbs, we put ourselves in their shoes and did the splits until it hurt. The results are in. Frankly, I’d trust this power ranking as far as my spirit fingers could throw it, but that’s dance for you. Always keeps us guessing. Always with the spirit fingers.

Let’s prepare to dance like the nation’s watching. It’s showtime.

Prediction: Vaz proved unlucky in love in his earlier reality shows, so will DWTS NZ be where his romantic dreams finally come true? Will Vaz fall in love with…fancy footwork? Alas, someone has to be  first to leave, and it is better to have danced and lost than never danced at all.

Prediction: If the world was fair, Rhys would win this entire dancefest based on the happy citrus energy of this photo alone. Sadly, Rhys has worked for DWTS’s bitter enemy Seven Sharp, and in this cutthroat world of sequins and spray tans, this can only lead to disaster. I wish things were different.

Prediction: Kerre knows how to dance around dodgy talkback opinions, and she’ll attract a shedload of votes from the loyal Newstalk ZB and Women’s Weekly crowd. Maybe Mike Hosking will join her for the annual DWTS trio dance. Dreams are free, friends.

Whomst: Jazz is an activist, best-selling author and award-winning film maker who was named Young New Zealander of the Year in 2021. She also co-founded her own suicide prevention agency Voices for Hope, an organisation commended by Queen Elizabeth.

Prediction: Brodie is destined to be our next big dance star, mostly because Brodie Kane rhymes with Candy Lane. Coincidence? I don’t think so.

Prediction: I can’t forget Sonia’s terrifying performance as an enraged French hairdresser in Netflix’s The Royal Treatment, and now I’m too scared to rank her any lower. Also, I can feel in my waters that Sonia was born to dance the Viennese Waltz, and with the guidance of two-time winner Aaron Gilmore and the luck of the Lotto balls, how can this go wrong?

Prediction: Climb aboard the Eli train, it’s going all the way to Dancetown. Not only is Eli part of the first all-male DWTS NZ couple, but he’s also the only contestant wearing this absolutely cha-cha-charming shirt, and everyone knows fuschia is the colour of champions. Ground-breaking, break-dancing, we love to see it.

Dancing with the Stars NZ begins in April on Three and will be hosted by Sharyn Casey and Clinton Randell. Three say the judging panel will be announced in the next few weeks.